Avia, is the third elemental in the Garage Kits.US series “The  Denizens of ZO”.  This air elemental gracefully glides above the clouds in the elegant sculpt by Keith Kopinski. A few minor adjustments were made before painting began.

When test fitting parts some difficulty was encountered getting the sash tabs to engage with the receiving slots in her waist.  Even though the parts were slightly heated to be gently reshaped, one of the tabs broke. It would have been nearly impossible to reattach.  Therefore, the second tab was also removed and both were then attached to the figure’s waist.  The sash was heated to ensure a snug fit at the waist and Aves Apoxie Sculpt filled a tiny gap (1).

There is a small post in the knee cradle of the cloud to position the figure properly.  Not wanting to permanently attach the figure, a more secure connection was desired.  A finishing nail was anchored into the resin post for additional support (2).

There was a bit of a gap between the bottom of the cloud and the base.  A Dremel tool was used to remove the clear resin along the inner corners and around the center tab (Indicated by red line). The center tab was also shortened (3).

PLEASE NOTE:  The base on this kit was changed at the request of clients, to include a negative space within the bottom of the cloud for lighting to be easily installed.

The necklace had two smaller hanging attachments. These were spot glued then reinforced from the back with epoxy. They were also positioned on a toothpick to add movement and avoid a flat appearance (4).

It is impossible to do a 1,2,3 “step by step” guide on how a piece was painted using my approach.  The colors often go back and forth, they get lightened, darkened, then lightened again.  Multiple layers of opaques, semi-transparents, and transparents, are applied to gradually build to the end result.  Keeping that in mind we will proceed. The figure was cleaned, prepped then sprayed with a rust color primer.  Colors are built up in layers working from dark to light. Dark African Flesh was applied as the base color (5)

An equal mix of Leather Tan and Toffee Brown was sprayed next followed by Leather Tan (6).

Because the figure was painted in separate pieces it was imperative they matched and there would be continuity of color when it was finally assembled.  The final color refinements and highlights were done with the pieces temporarily held together with Fun Tack (10).

An equal mix of Mars Red and Leather Tan was used to base the lips.  The same colors mixed with some Tongue and GK Flesh was used to highlight.  Titanium white and a little burnt sienna watercolor (WC) was used to highlight the philtrum.  The sclera was based with Sandstone and a touch of Denim Blue then highlighted with Sandstone.  Eyebrows, eyelashes and hairline were edged with brushed black WC. Pastels were used on the forehead along the hairline, above the eyes, cheeks, earlobes, and outer nostrils (11).

Hair was based Jet Black.  Most of the eye detail was done using watercolors. Iris placement and sizing was done with black.  Dark brown was used for the base iris color followed by a lighter brown highlight on the lower portion of the iris.  Several browns were used for striations. Lastly a black pupil was spotted.  Some white was added along the iris for a highlight. Pink was brushed along the edges of the eyelids.  Brown was used to lighten the eyebrow and for the lower eyelashes. The lips were highlighted with a lighter value of the colors listed previously (12).

With the skin tones and face completed attention turned to her clothing (what little there was). After masking with Silly Putty and plastic wrap, the bikini was airbrushed a Lavender base. A mix of 1 part Lavender with 3 parts Pure White was used as the fill color (13).

Pure White ST was used to begin highlights followed by Pure White (14).  CAUTION: do not seal with Dullcote!  When this was sealed with Dullcote all of the base Lavender bled through to the surface and the shading was destroyed.  The same result has happened with magenta. Next time I may try sealing with Future/Pledge before applying a flat topcoat.

Jet Black was the base color for the hair. This was followed by Dark Brown, an equal mix of Orange and Dark Brown, then a layer of Medium African Flesh (15).

A black WC wash was applied to deepen the texture. T Jet Black and T Burnt Sienna were airbrushed to darken. LSBA Burnt sienna and raw sienna were then dry brushed. Some T Ultramarine was misted as the final color adjustment (17).

All metallics were based with black WC then sealed because mistakes are easily cleaned (18).

Very small straight pins were cut short and used to hold jewelry in place.  The heads matched the rounded button in the center of the pieces.

The sash was primed with Gray Surface Prep then based with a 1 to 4 mix of Denim Blue and Pure White. Pale Blue was used to highlight the underside and to base the topside.  A light application of Pure White highlighted the top (24).

A medium point white Sharpie white paint marker was used on the raised emblem. Several applications were  necessary. Blue pastel was used to shade the inner edges around the emblem. The border was brushed with a LSBA yellow ochre base then dry brushed LSBA bright yellow (25).

Toffee Brown was applied around the edges.  LSBA raw sienna dry brush to enhance textures. T Burnt Sienna was used to adjust the overall tone. A black WC wash darkened detail. A Silly Putty mask was applied then T Jet Black was used along the wing tips and the inner row of feathers. A final dry brush of LSBA raw sienna to highlight (27).

The eyes were based with yellow ochre, then a yellow fill.  The beak was based, and the eyes outlined, with taupe (28).

The beak was sprayed Yellow Ochre then highlighted with an Ivory White / Yellow Ochre mix. Watercolors were used to detail the eyes and add highlight edging to the beak.  Pastels were used for final shading (29).

The underside of the wings appeared grayish in reference photos. A dark gray was misted over the lower wing then a LSBA gray was dry brushed (30).

The cloud base was first airbrushed with Future/Pledge to bring out the transparency (31).

ST Pure White was used to begin highlighting and to create a transition from a transparent bottom to an opaque top (32).

A light application of Frost Blue was used to shade the undersides of the upper cloud. The tops were highlighted with Pure White.  Some cool gray oils were used to enhance shaded edges and preserve transparency.  Whatever color was beneath the cloud base would show through because of its translucency. Therefore, the underside of the base was painted Pure White to reflect light back up and in (33).

The base was masked with tape and Silly Putty to protect from possible unwanted texture (34).

The stone area was based Jet Black. Spray cans of rust, different grays, and white were spritzed overall.
The can was held about 18” to 24” away and the nozzle was quickly tapped and released to disperse small dots over the area.
A black WC wash was applied and wiped clean over the decorative motifs (35).

The stone areas were masked and LSBA Brilliant Blue was thinned and airbrushed. The value was lightened with white to highlight. An even lighter value was then dry brushed over the raised pattern (36).

The gold band was based Deep Gold Metallic. Metallic Bronze was the fill color and Pearl Gold was used for highlights. AK True Metal Gold was applied to the raised designs then buffed with a soft cloth (37).
NOTE: If done again I would do the stone color and texture after the blues and metallics. I believe masking would be easier in that order.

Despite test fitting before painting, some adjustments became necessary. The eagle’s wing and Avia’s hair were hitting. The left wing was warmed with a hair dryer so that it could be raised a little.  The hair also needed to be reshaped a little, not as easy to do.  The painted hair was placed in the microwave for about 20 seconds, checked to see if it would adjust, then nuked again for another 15 seconds. The back portion of her hair was lowered slightly.

PLEASE USE CAUTION IF ATTEMPTING TO RESHAPE PARTS.  Times given are approximations and cannot guarantee similar success. 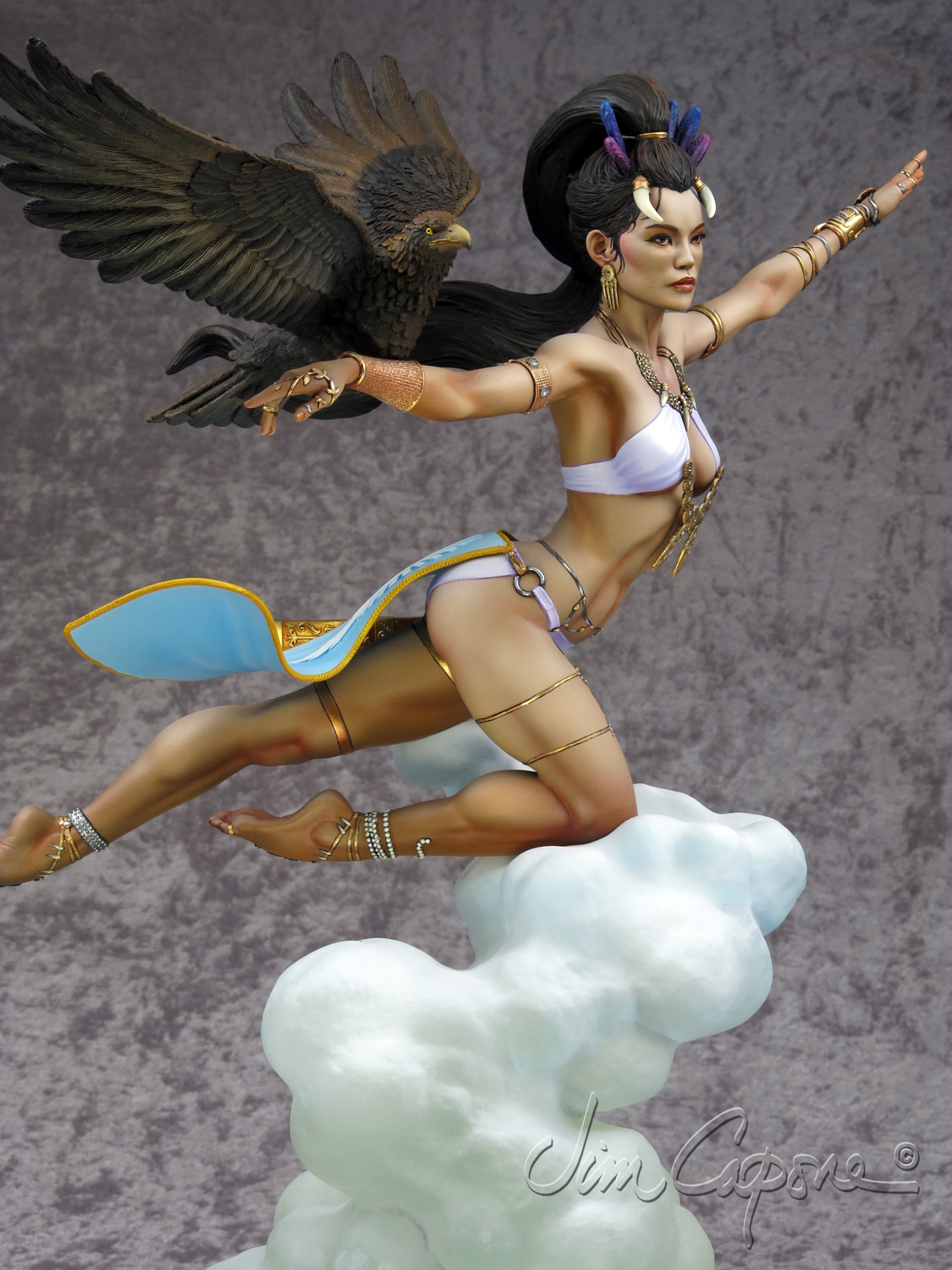 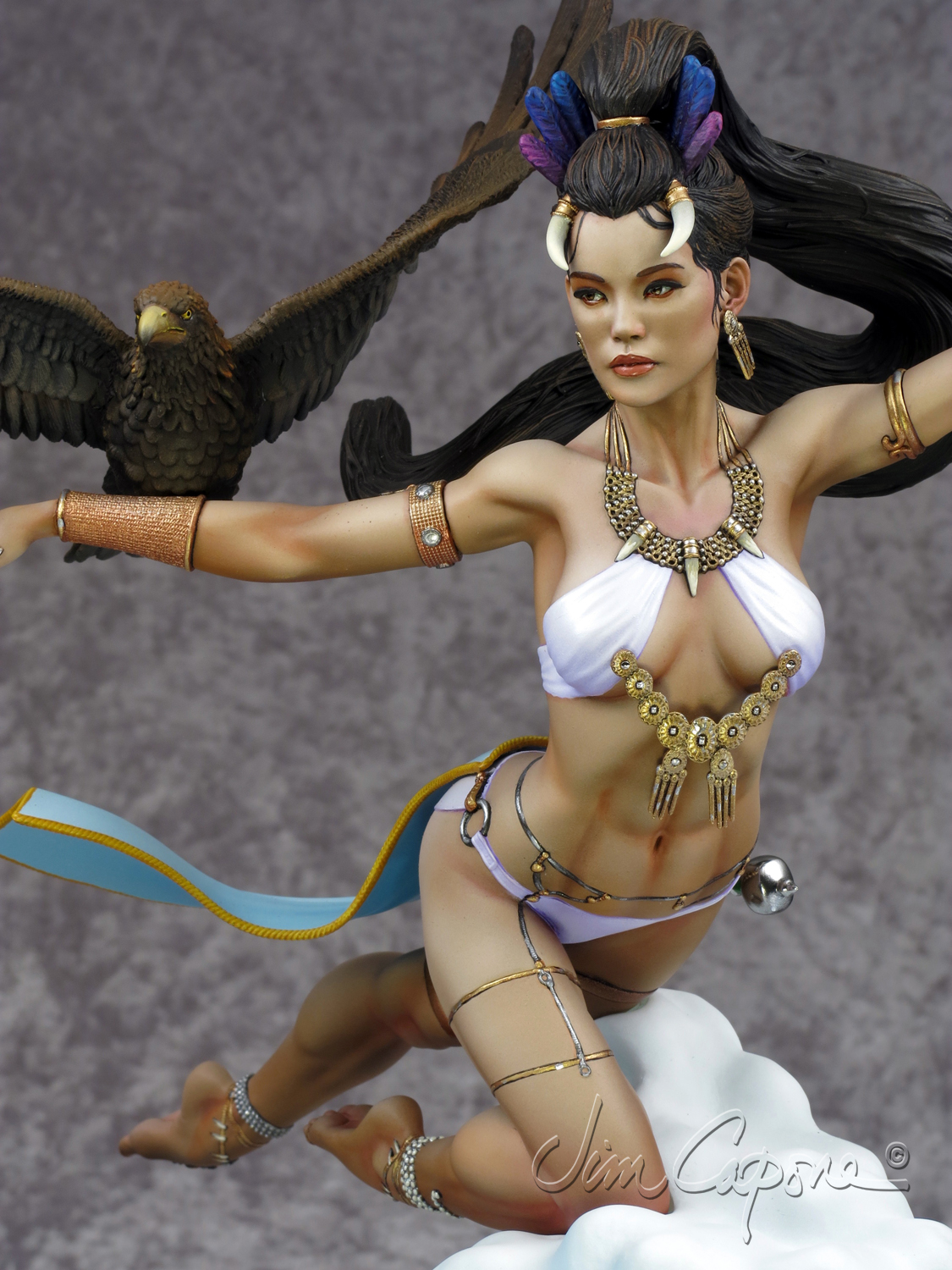 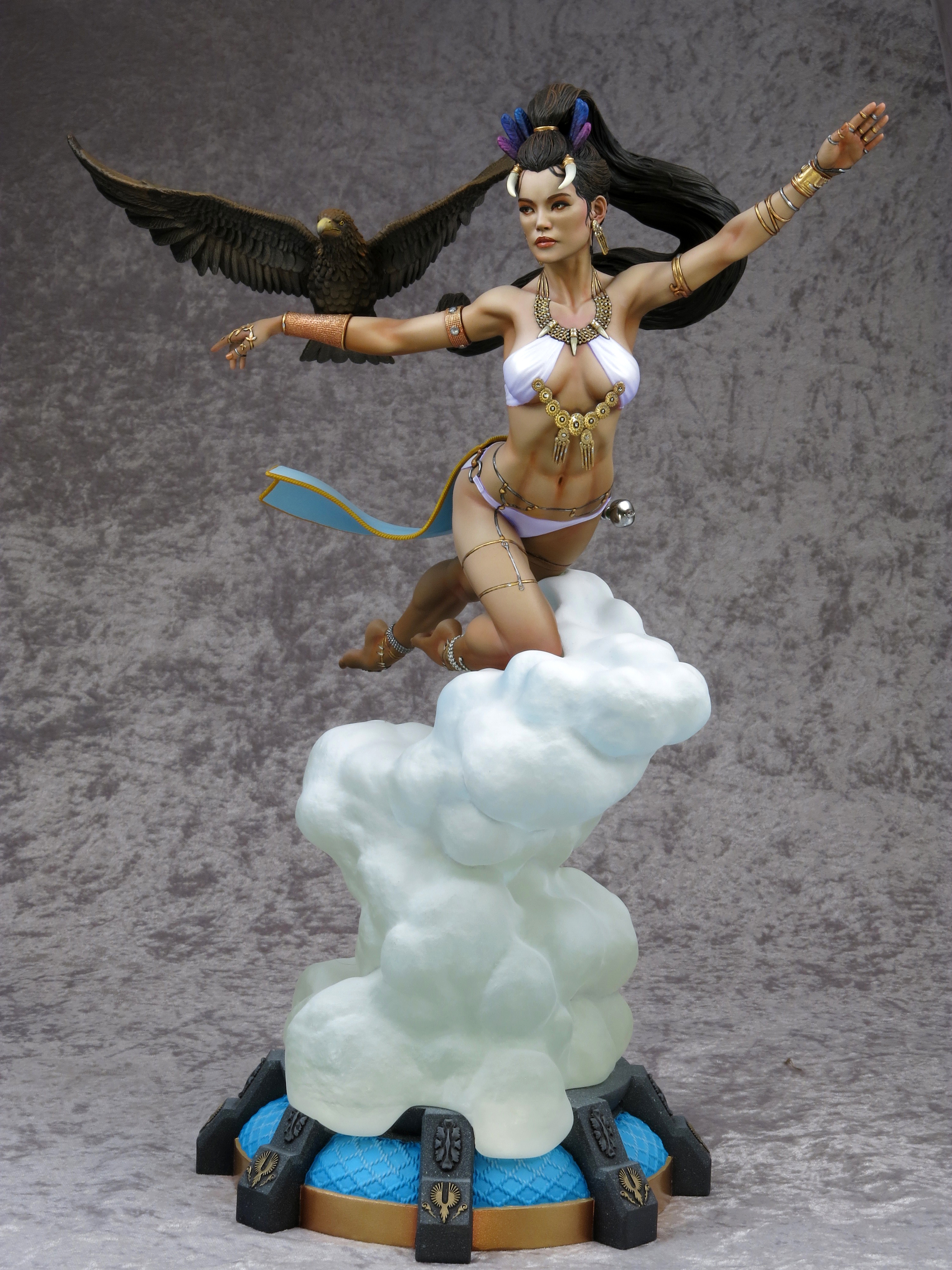 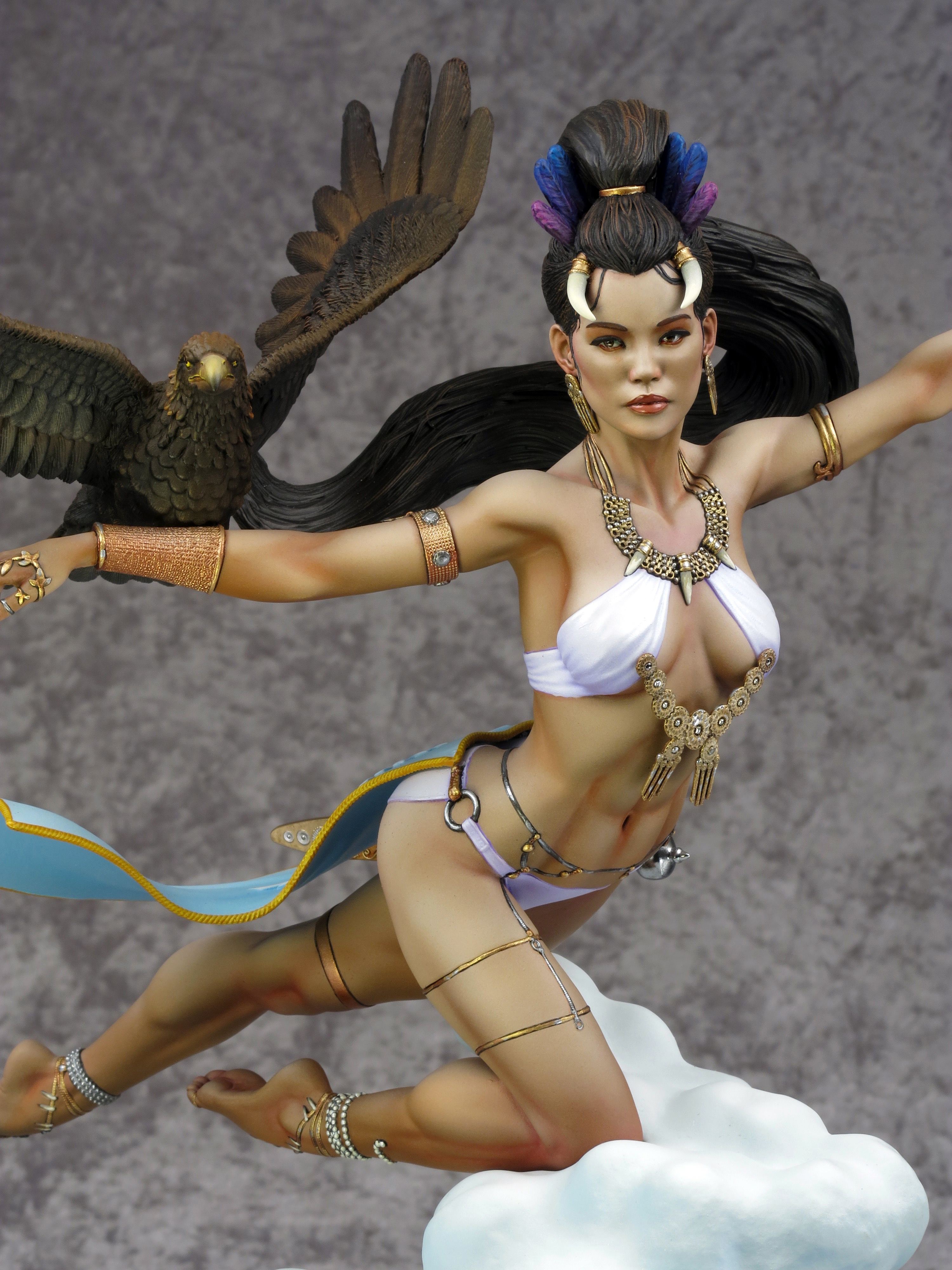 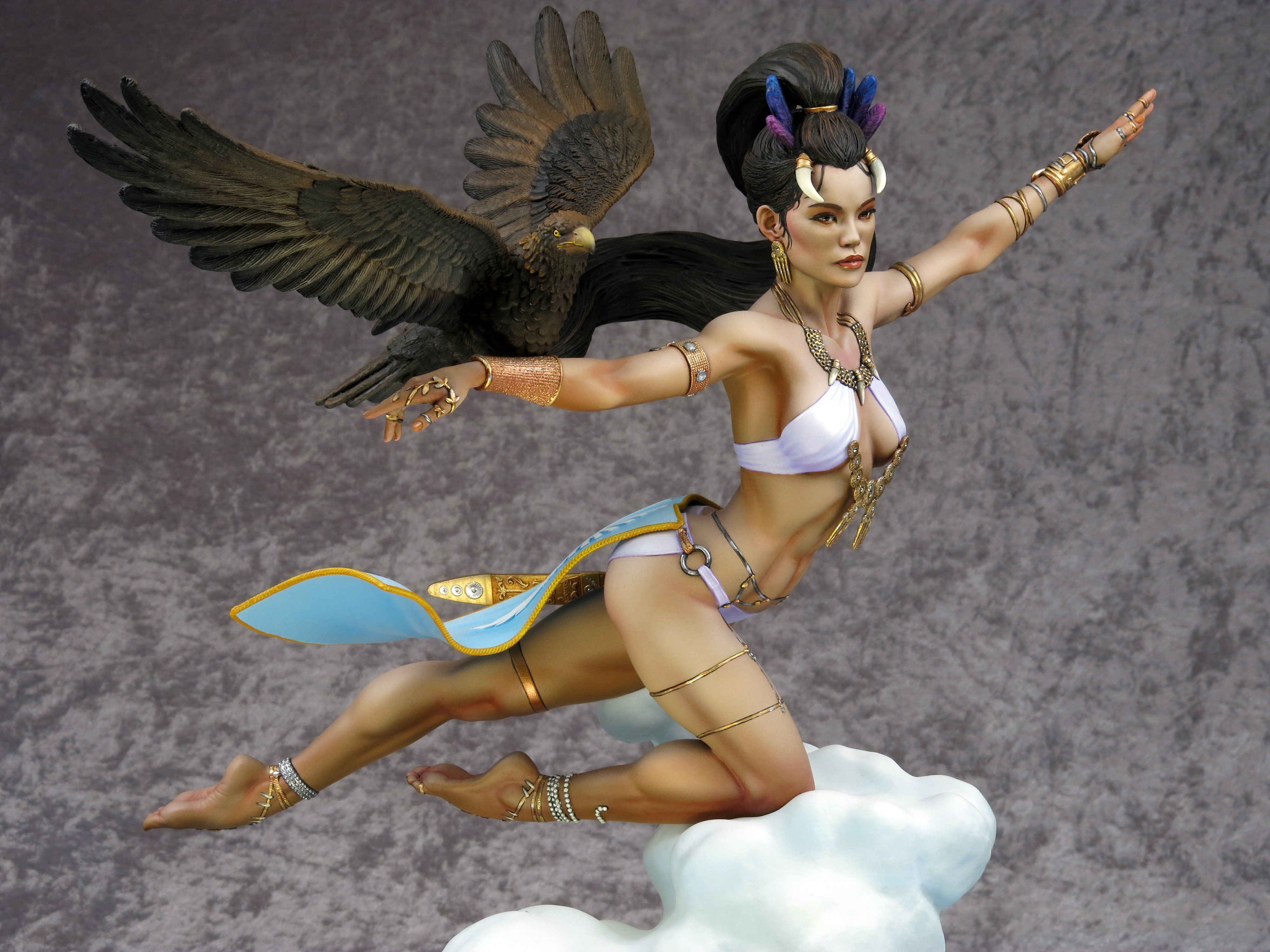