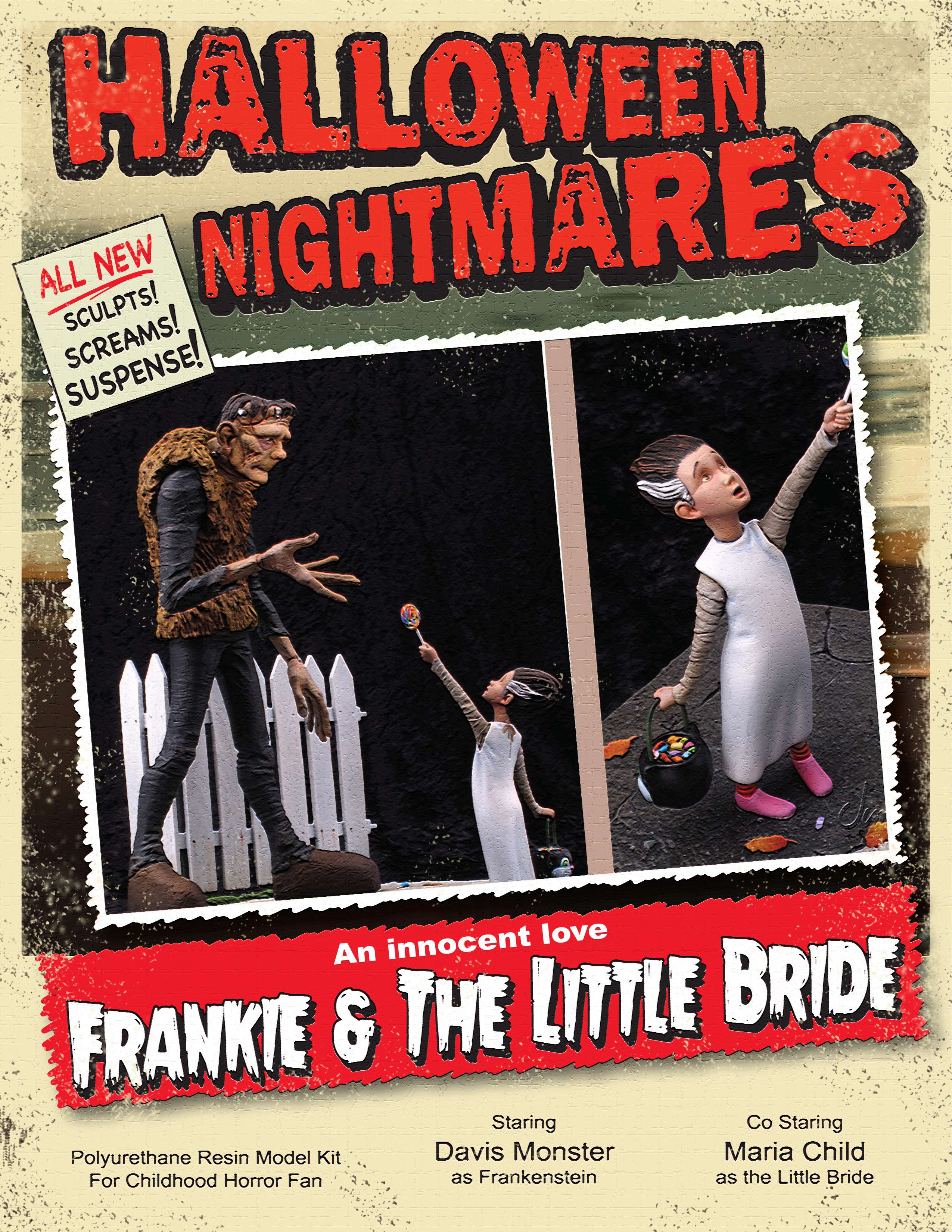 Prep work was the same as with any kit.
One minor issue to deal with were some occasional clusters of pinholes in the fur vest.
These were easily filled with modeling paste thinned slightly with water and applied by brush.
The proper consistency fills the holes without obscuring detail.  Frankies legs need to be assembled before painting.
Head and arms were pinned but kept separate until after painting.
Similarly, the little brides arms were attached but her head was pinned and left separate for painting.
The lollipop and treat bucket were also painted before assembly.

Once dry, the area was primed and ready to paint because sanding was not necessary (1).

Skintones, the face and hands were first primed with rust color primer.
Transparent Medium Green was applied to the recessed areas.
The head was then sealed with Dullcote.
A Burnt Umber watercolor wash was applied and wiped with damp cloth.
Remember to always seal before and after applying watercolors (2).

Sepia was misted lightly over all to shift the overall hue to a more pleasing tone.
An equal mix of Garage Kit Flesh and Bright Flesh was used to highlight.
Pastels were then applied to enhance the depth and variety of color (4).

The eyes were based with a mix of equal parts Aged Bone and Natural Bone.
Sclera highlight of Natural Bone.
Watercolors were used to detail eye lids, scars, and minor skin deformities.
Purple pastel was placed around eyes.
And finally, the hair was based in Jet Black (5).

The irises were established with watercolors and then sealed.
Striations, pupils, sclera highlight and pink dots added to the corners of eyes were all done with watercolors.
Green pastel was added to side of both nostrils.
Red pastel was added around neck bolts.
The hair was dry brushed with Liquitex Soft Body Acrylic dark and medium browns.
Bolts brushed were with Jet Black, then a mid-tone mix of Metallic Silver and Jet Black (2/1).
Golden Acrylic Silver highlights. Eyes glossed with Tamiya Clear (6)

The fur vest was based with Dark African Flesh into the deep texture lines.
Then Toffee Brown was sprayed at an angle from above as an overall fill color (7).

A Burnt Umber watercolor stain was applied to deepen the texture.
Transparent Leather Tan and Transparent Nicotine Yellow were sprayed to adjust the overall color.
Yellow Ochre Liquitex Soft Body Acrylic was dry brushed to enhance texture and highlight.
Transparent Dark Brown was then sprayed to punch in shadow areas (8).

The end of the sleeves were brush outlined with Jet Black.
Silly Putty used to mask completed hands (9)..

The jacket sleeves and pants were airbrushed using Jet Black as a base color.
A mix of Paynes Gray with just a touch of Neutral Gray was applied as an overall fill color.
A two to one mix of the same colors used for a mid-tone.
After which an equal mix of the two provided highlight value.
Finally a Light Gray Liquitex Soft Body Acrylic was dry brushed to enhance the kit texture (10).

Transparent Jet Black was misted overall to darken and blend the various colors.
Pastels were worked into the recesses to add contrast.
Liquitex Soft Body Acrylic Brown was dry brushed around sleeves and cuffs.
Watercolor browns were spattered for dirt and to show wear (11).

Watercolors were added to color in the scars and to create spots.
Finger nails darkened with black pastels then detailed with Black watercolor.
Skin tones and metallics on hands were done the same as on head (12).

Shoes were first airbrushed with Dark African Flesh as a base color.
Medium African Flesh was used as the mid-tone.
Transparent Burnt Sienna misted over to enhance the color.
Highlights were achieved using Spice Tan (13).

Face and hands of the little bride based were with a rust color primer, that was followed with an overall misting of Leather Tan (15).

Color adjustment was done by a light misting of Gold Toner, and then Transparent Bright Flesh.
Final highlight were done using Semi-Transparent Virgin Flesh.
Pastels were used to add color around eyes, ears, nose, and neck.
Black water color was brushed along the hairline and brown watercolor was used for the eyebrows.
The eyes are a brushed Grave Stone Gray with a touch of Denim Blue.
Sclera highlighted with Grave Stone Gray.
A little WC was used to highlight philtrum (ridges beneath nose)(17).

Hair based in Jet Black then dry brushed with Red Oxide Liquitex Soft Body Acrylic.
Iris color brushed with a light brown watercolor.
After sealing, dark brown watercolor striations were added.
Pink watercolor was used to dot in the corners of the eyes.
Tongue highlighted with Tongue, and the same color lightened with GK Flesh was used for the lip colors.
Pink blush was added to cheeks with pastels (19).

The gown was based with Gray Surface Prep then airbrushed with Neutral Gray (21).

Mix of Frost Blue and Pure White used as a fill color.
Pure White sprayed from above used to highlight.
Sleeve bandages based in Aged Bone, after which a Brown watercolor wash was applied, allowed to dry, then wiped with a damp cloth to pull out the texture.
Aged Bone was then misted over to soften the contrast.
Finally a light spaying of Linen used to highlight (22)

Black watercolor was brushed into the separation on the back of the gown.
The drawstring was brushed with light brown and highlighted with yellow ochre Liquitex Soft Body Acrylic.
Blue pastel was worked in around the knot for shadow (23).

Shoes and socks were masked, then based in True Red (24).

Dark red watercolor wash was applied over socks and wiped with a damp cloth.
True Red with a little Vivid Orange was brushed for highlights.
Shoes brushed with Liquitex Soft Body Acrylic Medium Magenta.
Color thinned and lightened with Pure White then sprayed to highlight toe of shoes.
Brush highlights also added around the top, and Light Gray was brushed around base of shoe with white highlights (25).

Bucket was brushed Jet Black.
Pupils done in black watercolor.
Inner ear lined with Tongue, then thinned with water to draw the color down and fade out.
Candy inside the bucket also based in white, and a variety of bright colors brushed onto the individual pieces.
After sealing, a black watercolor wash was applied that soaked down between the shapes.
Once dry, a damp cloth used to wipe the surface clean leaving the black in recessed lines.
The contrast of black against the bright colors greatly intensifies appearance.
Pastels shaded the white of the eyes, around nose, and inside mouth (27).

Lollipop was based with white primer.
Watercolors were brushed on starting at top, and colors were applied in order starting with yellow then working sequentially in both directions.
After colors were set (red, orange, yellow, green, blue, and white pinstripes) highlight and shadow colors were added and brushed directionally.
Once the colors were placed, piece was sealed with clear acrylic spray.
Black watercolor was used to accentuate the spiral line.
Only the colors along the outer edge align with the opposite side (28).

A toothbrush was used to spatter some blacks and grays for texture.
Black watercolor used to deepen cracks and add additional ones.
Gray watercolor was used to highlight (30).

Sidewalk was based with GK Gray Surface Prep then airbrushed Aged Bone, after which a mix of four parts Linen to one part Aged Bone was applied (31).

Natural Bone, Ivory White, and Gravestone Gray spattered for texture.
Black watercolor was brushed into cracks and used to line a few new ones.
Light gray watercolor was used to edge and highlight (32).

All leaves, individual and groups, were painstakingly masked with Silly Putty (34).

Pure White was sprayed in a few places to provide base for brighter colors.
True Red, Vivid Orange and Bright Yellow were then randomly sprayed over masked leaves (35).

Fence was based with GK Gray Surface Prep.
A mix of three parts Ivory White to two parts Linen used as overall fill color.
Value lightened with misting of Semi-Transparent Pure White, highlighted with Pure White Opaque.
Liquitex Soft Body Acrylic white was dry brushed to bring out wood grain.
Pastels used to add dirt to bottom of the slats and discoloration running down from some nails (37).

The entire base was then sealed with Dullcote, and a final coat of GK Flat Top Coat.
Tamiya Clear was brushed to eyes, metallics, and lollipop.