Because I have done a few greyscale paint ups in the past few years, I have been eager to try the new Garage Kit U.S. Colors greyscale set I picked up at Wonderfest (2018), and when I received the new new quarter scale bust of Klaatu produced by John Dennent from The The Earth Stood Still, I knew it was the perfect piece to test these paints on. I also chose this piece because I wanted to challenge myself by attempting a metallic look for his suit that would be convincing in greyscale.

Klaatu comes in two parts, the bust plus the stone base with name plate. The piece was cast cleanly, and required only minor clean up. After a quick wash with dishwashing detergent, I primed it with Duplicolor grey primer. (Pic. 1) 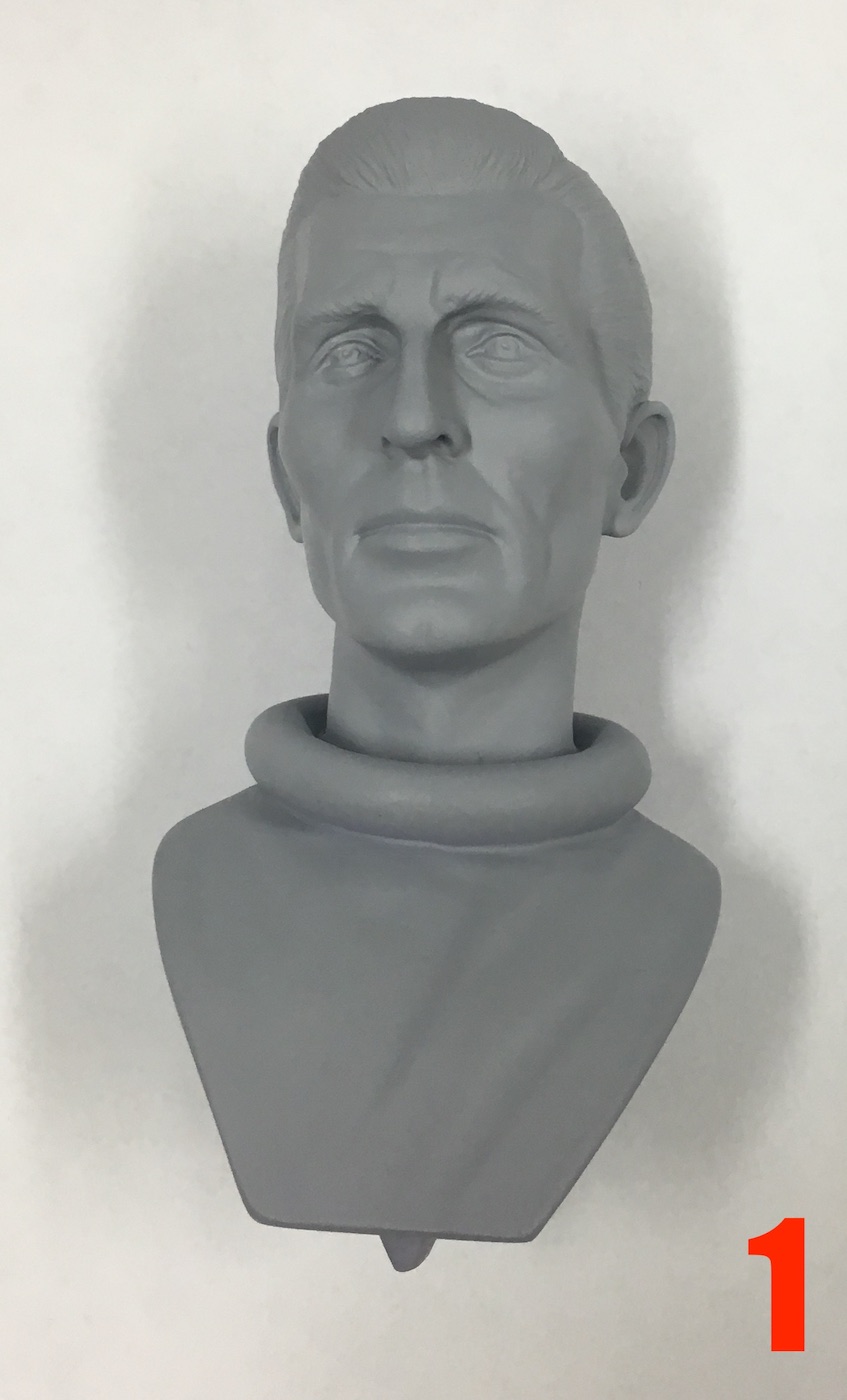 After comparing the shades of paint to still shots of Klaatu from the film, I decided to use the Warm Grey 3 as my base coat for the flesh. For the shadow areas, I used Warm Grey 4, and then Warm Grey 5 for the darkest areas, such as under the chin and nose. Then, I used Warm Grey 2 for my initial highlights, followed by Warm Grey 1 in more targeted areas, and a misting of Pure White sprayed from above to hit the highest points of the face. (Pic 2)

To blend the six different shades on the skin, I took the Warm Grey 3 and thinned it with some 91% alcohol. Since the paint is already semi-transparent, it did not take much to get a transparent wash. I then sprayed all of the skin areas from approximately 6-8 inches away and sealed it with Tamiya Flat Clear. (Pic.3 ) 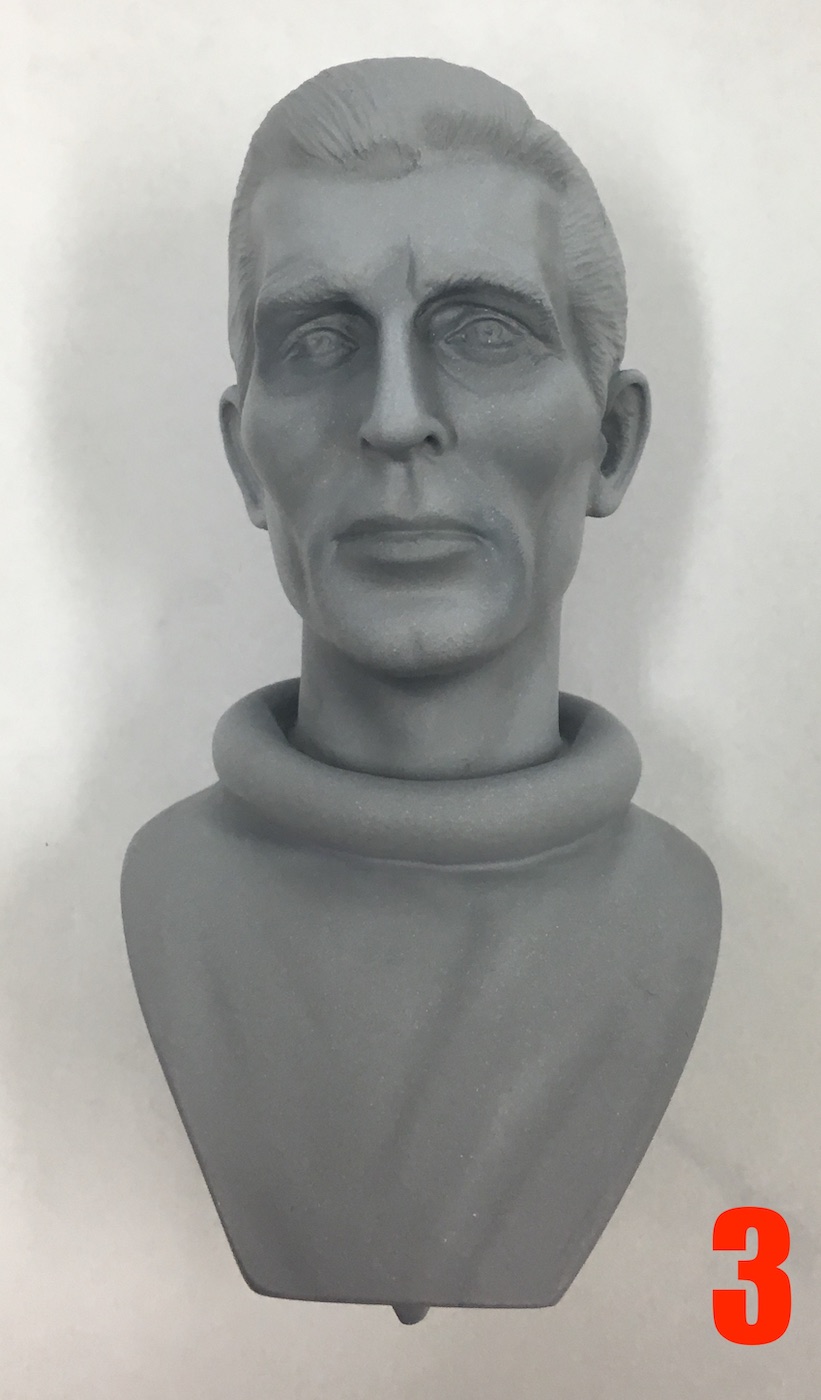 Once I was satisfied with my grey skintones, I took the Cool Grey 7, mixed in a little of the GK Thickener, and hand brushed in the hairline and eyebrows. (Pic. 4) 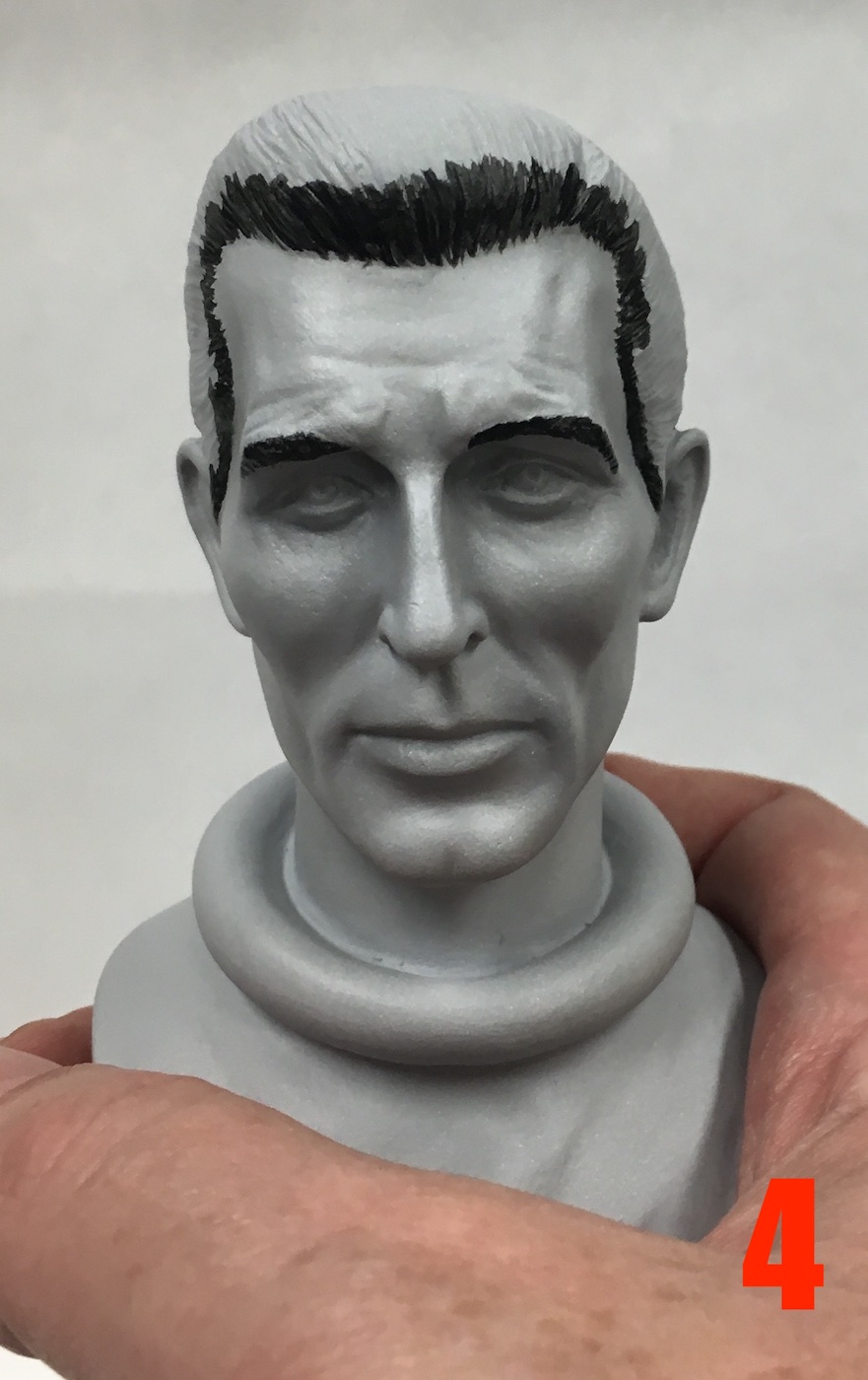 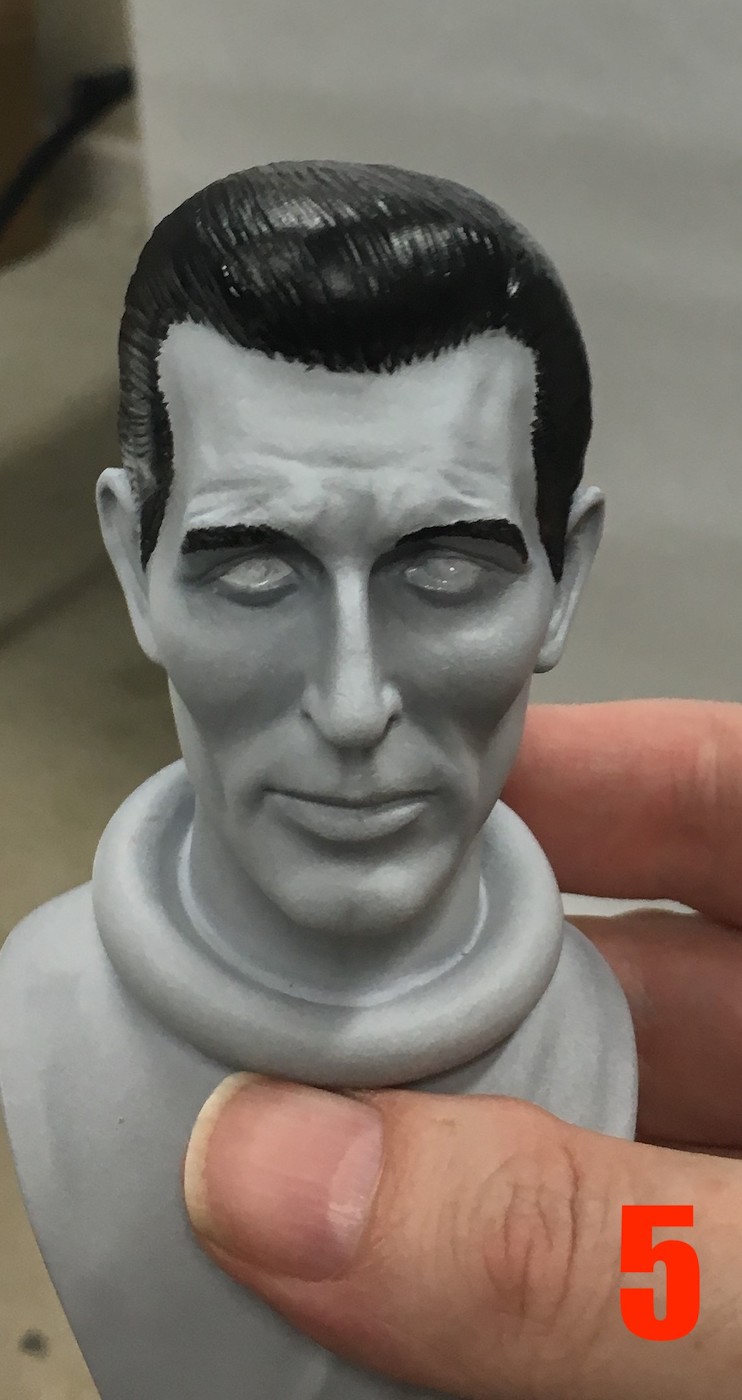 Moving on to the eyes, I brushed painted Warm Grey 1 on for a base coat. Using a black watercolor paint, I outlined the pupil. Once I was happy with the shape and placement, I filled the area with Warm Grey 6, while letting the black still show around the edges, then used Warm Grey 5 and 4 for the highlights, and used Warm Grey 7 to paint the pupil. Next, I used Warm Grey 2 to line the lower eye lid, painted on the eyelashes using Warm Grey 7. As the final step for the eyes, I added highlights to the sclera with Pure White. (Pic. 6) 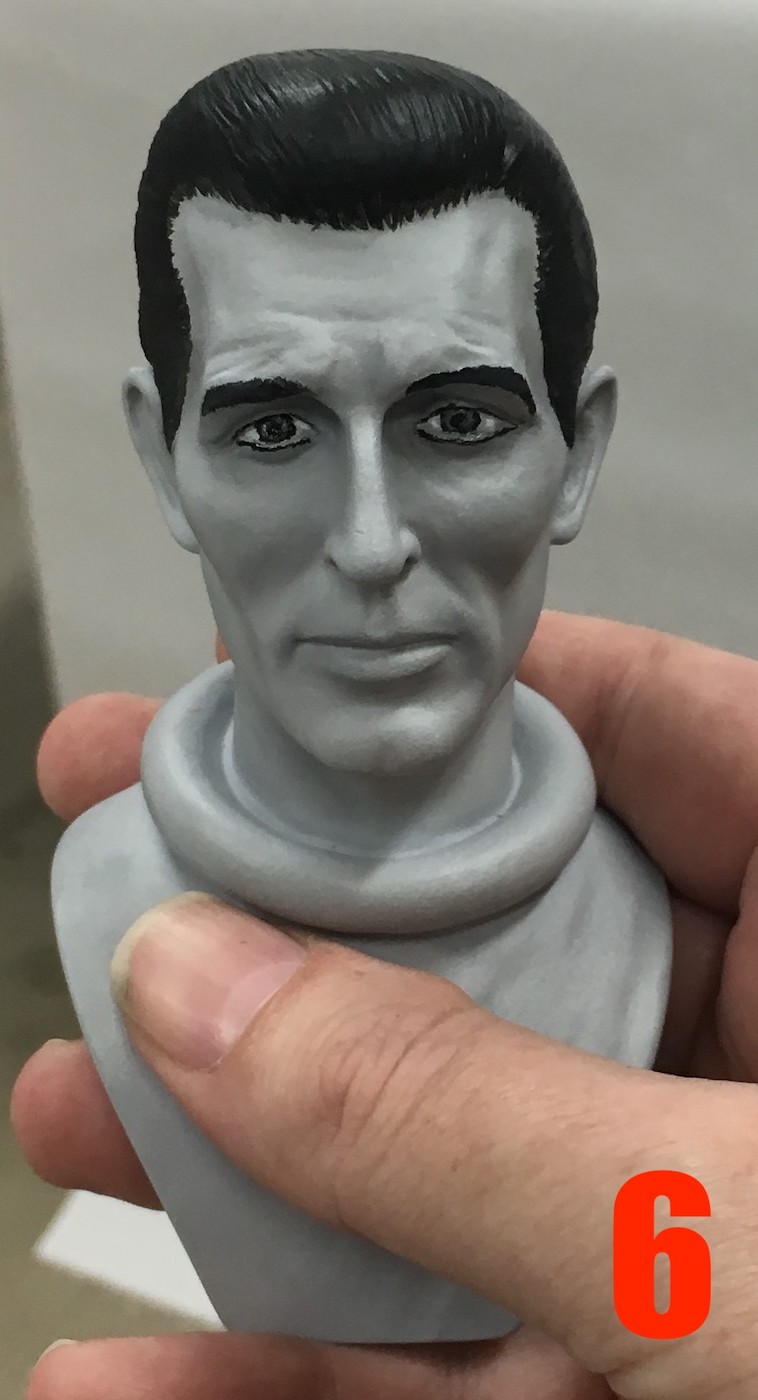 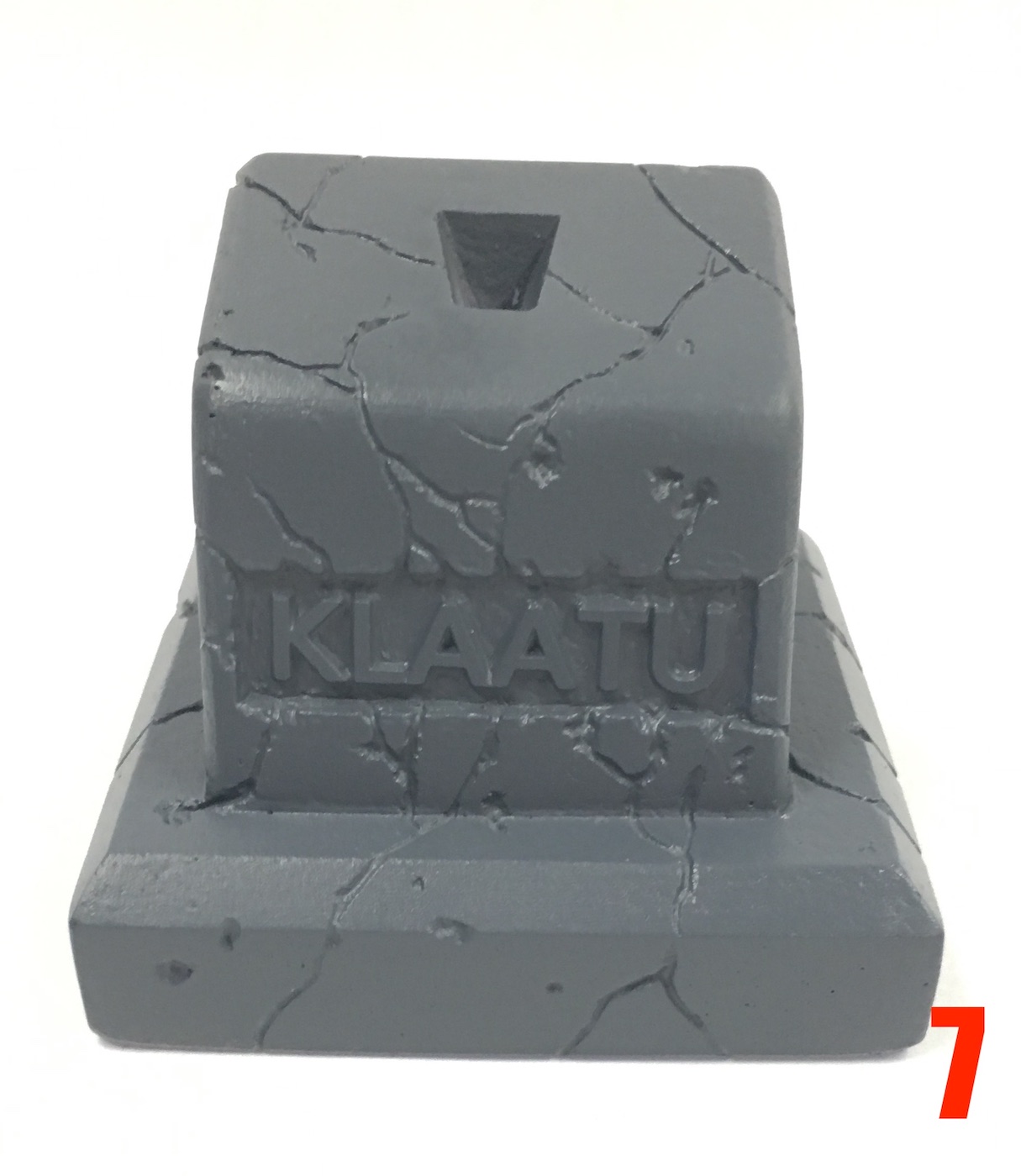 Then sponged and stippled on mixtures of Warm Grey 6, 5, 4, and 3, and dry brushed Warm Grey 1 on the edges. For the letters, I mixed GK Metallic Silver with the GK Thickener, and carefully brushed it on. I mixed a wash of Warm Grey 6 and 7 with water, and applied it over the entire base, including the letters. (Pic. 8) 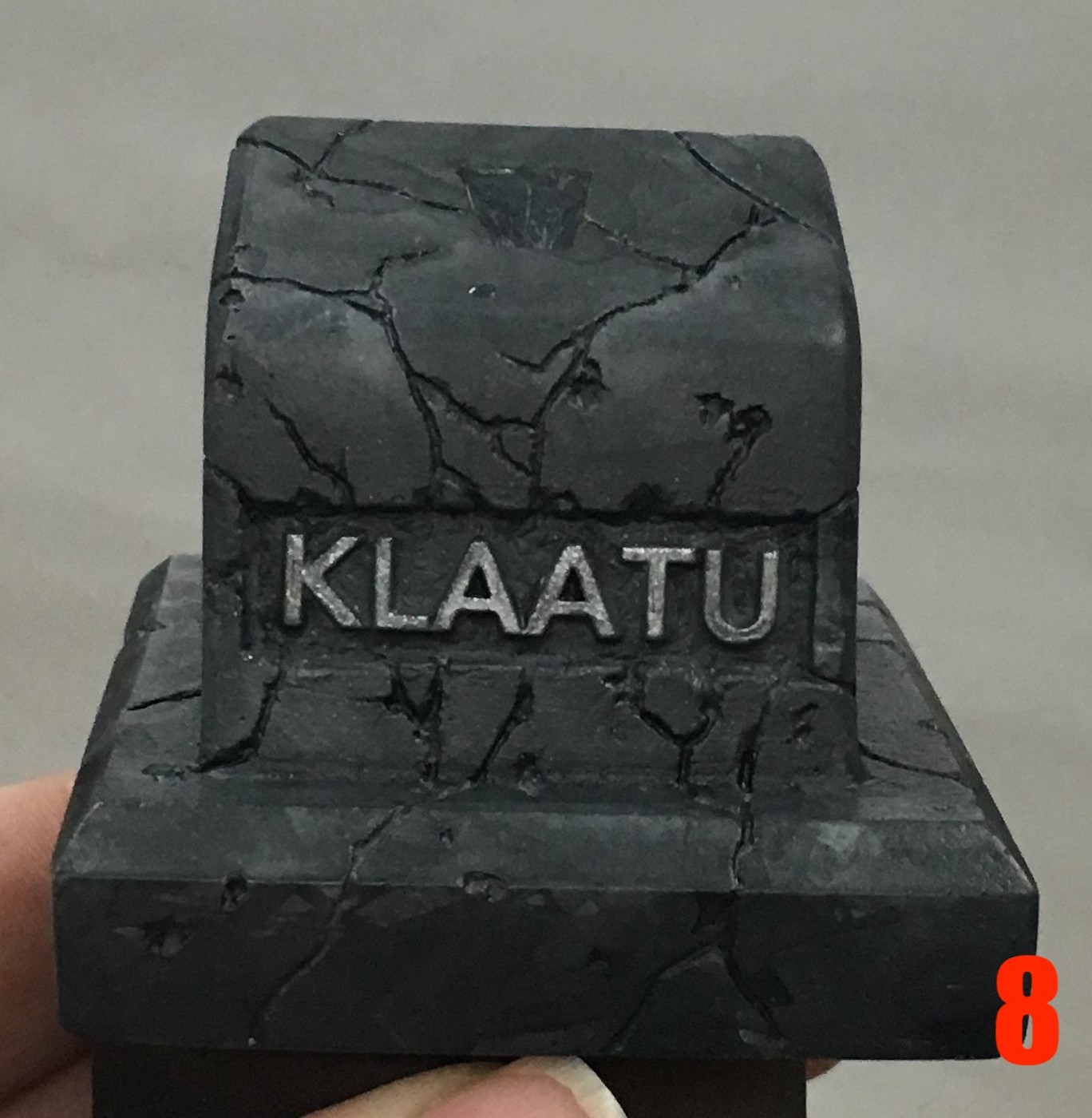 Watching the movie again, I found that his suit is a darker metallic grey. To paint the suit, I started with a mix of Warm Grey 5 and Metallic Silver. I brushed it on around the inside of the collar, then masked the head with silly putty and Parafilm, and airbrushed the Warm Grey 5/Metallic Silver mix on the suit. I followed this with Warm Grey 6 mixed with Silver for shading, and a Warm Grey 4/Metallic Silver mix for my highlights. I was very happy with the metallic look, but when I clear coated it, all of the metallic sheen went away. (Pic. 9)

To correct this, I masked of the head again, and misted the Metallic Silver from above. After it dried thoroughly, I lightly used greyscale pastels to darken the shadows of the suit, and also darkened a few shadows in the skin. As the final step, I added Triple Thick acrylic gloss to coat the eyes, and permanently attached the bust to the base. ÃÂÂ ÃÂÂ Overall, I am extremely pleased with the GK greyscale set, and in particular, I like the variations that are possible with the inclusion of both warm and cool sets. The semi-transparent quality of the paints allows them to blend very well. I was easily able to get the look I was going for with Klaatu, and I look forward to using this set on future projects! 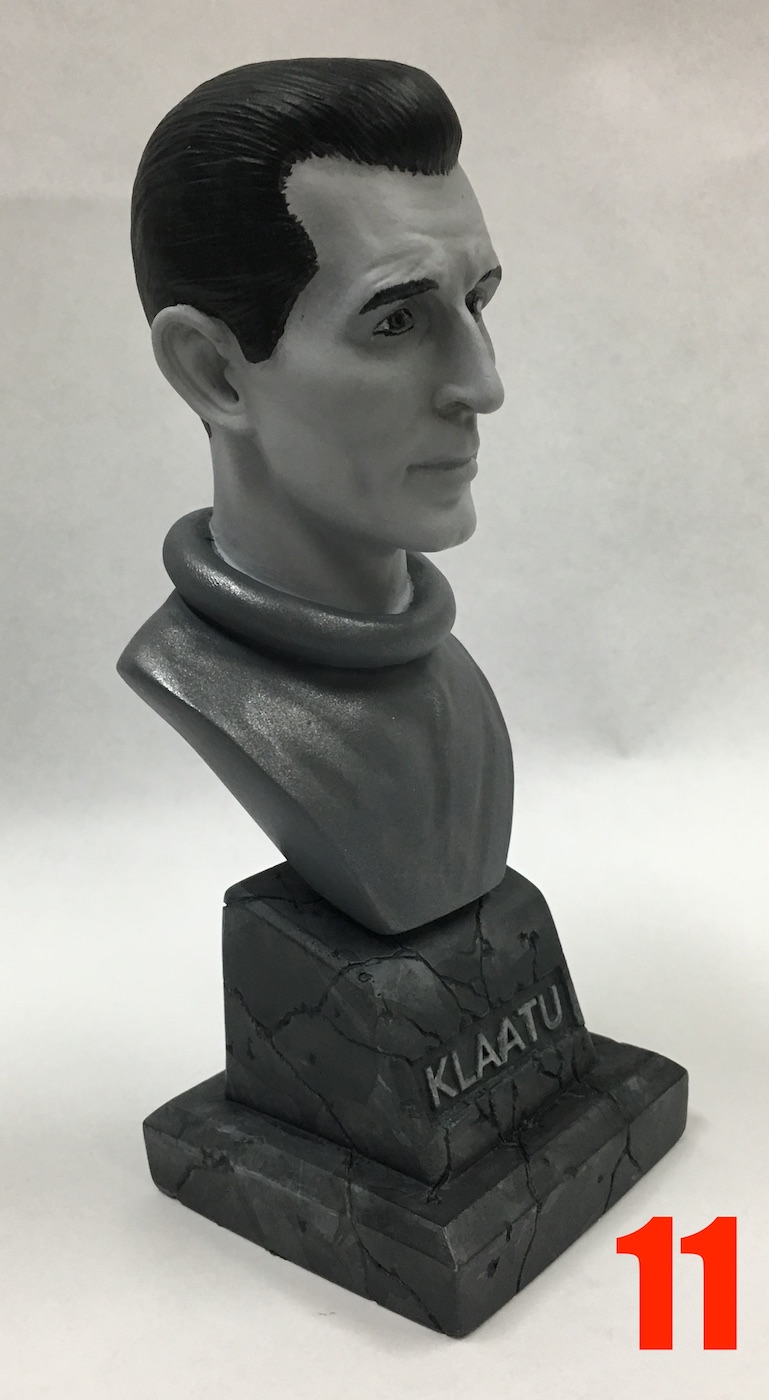 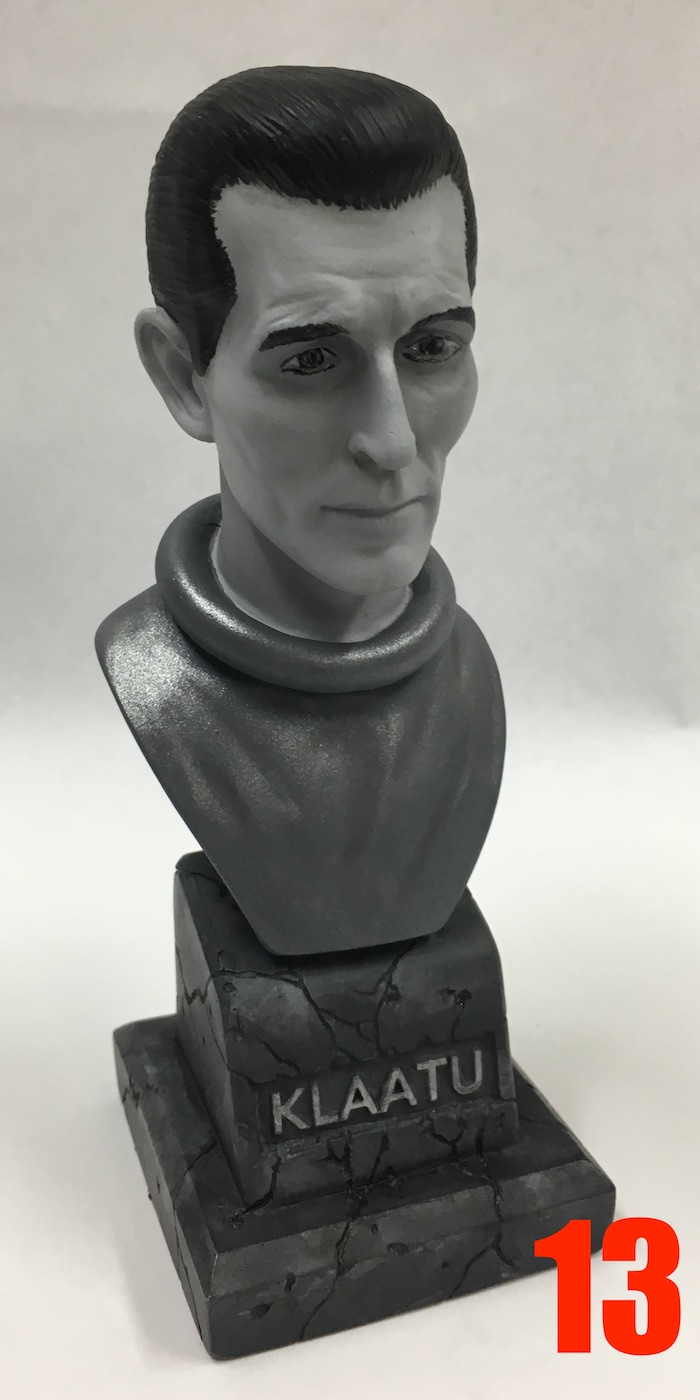 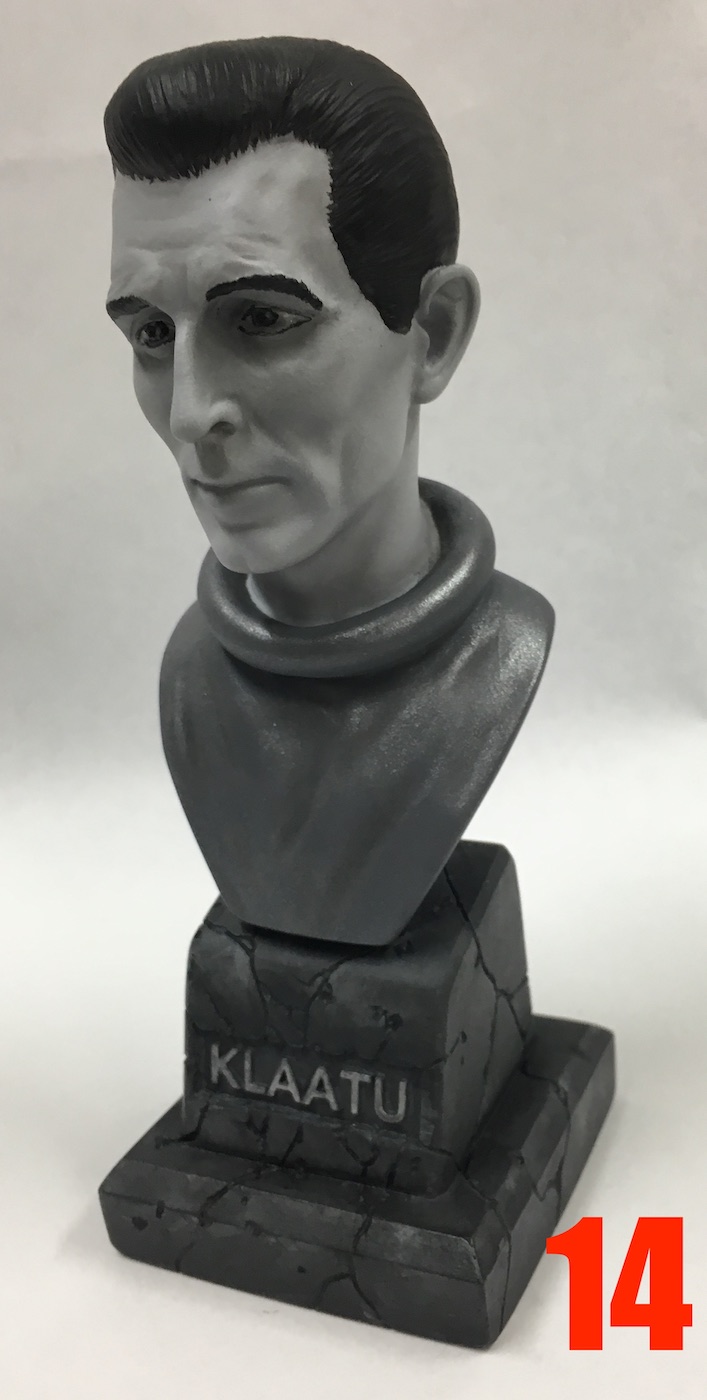