I thoroughly enjoy painting female kits. And the figures sculpted by Roberto Von Behr are some of my favorites.  I was fortunate to paint a prototype of his Princess of Mars sculpt being developed by Garage Kits.US.

PLEASE NOTE ... the photos in this tutorial are all of the original prototype.  The kit has since been retooled and portions resculpted ... the actual kit is pictured above. 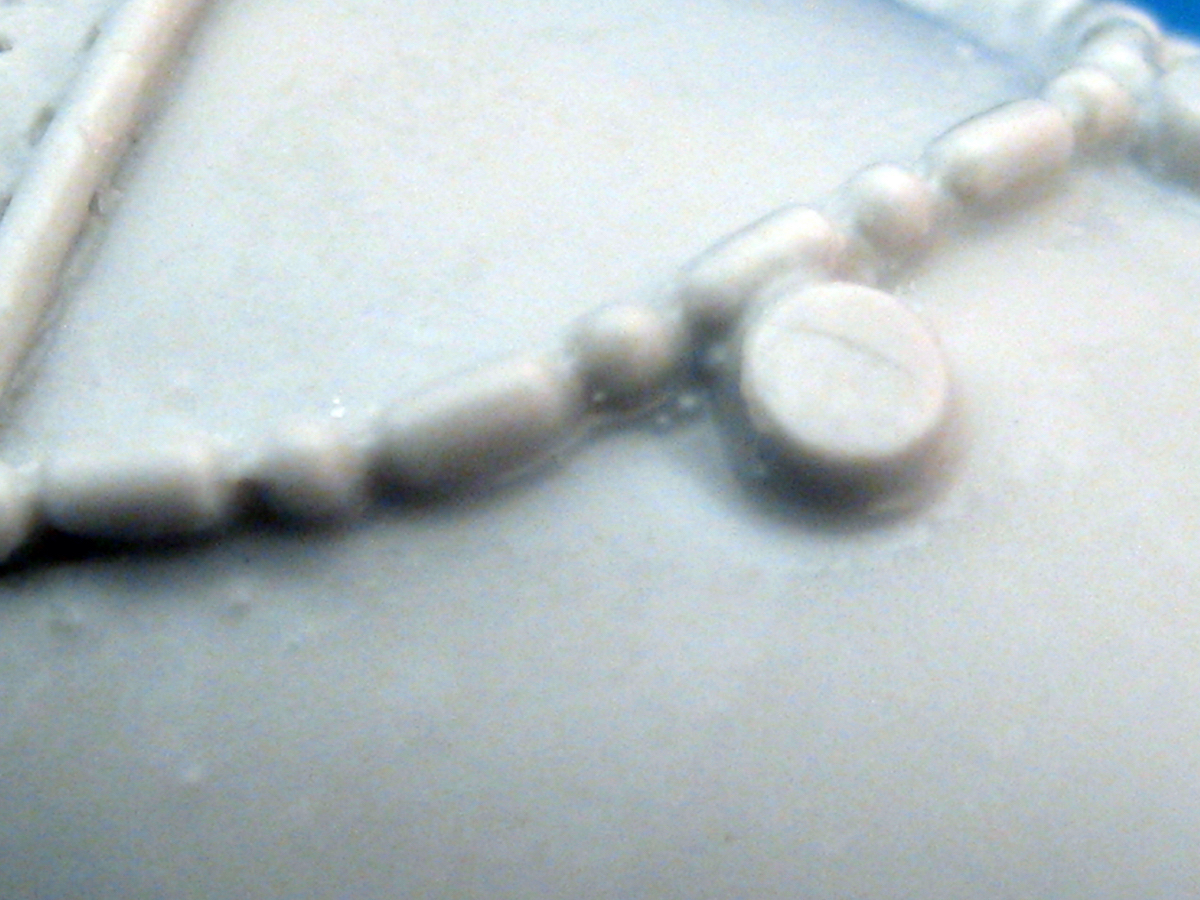 An angled carving tool was used to undercut the edges to sharpen and set them off from the body. The earrings presented a special problem. I noticed that the tip of one had broken off. This may have occurred while it was being unwrapped. Because of its hook shape, my concern was that they could easily snag at any time and break again. I decided to fabricate replacements with forged16-gauge wire. The end of a six-inch length was wrapped around a dowel with the same diameter. One end of the curve was flattened with a hammer and the other was filed and tapered to form the tip. 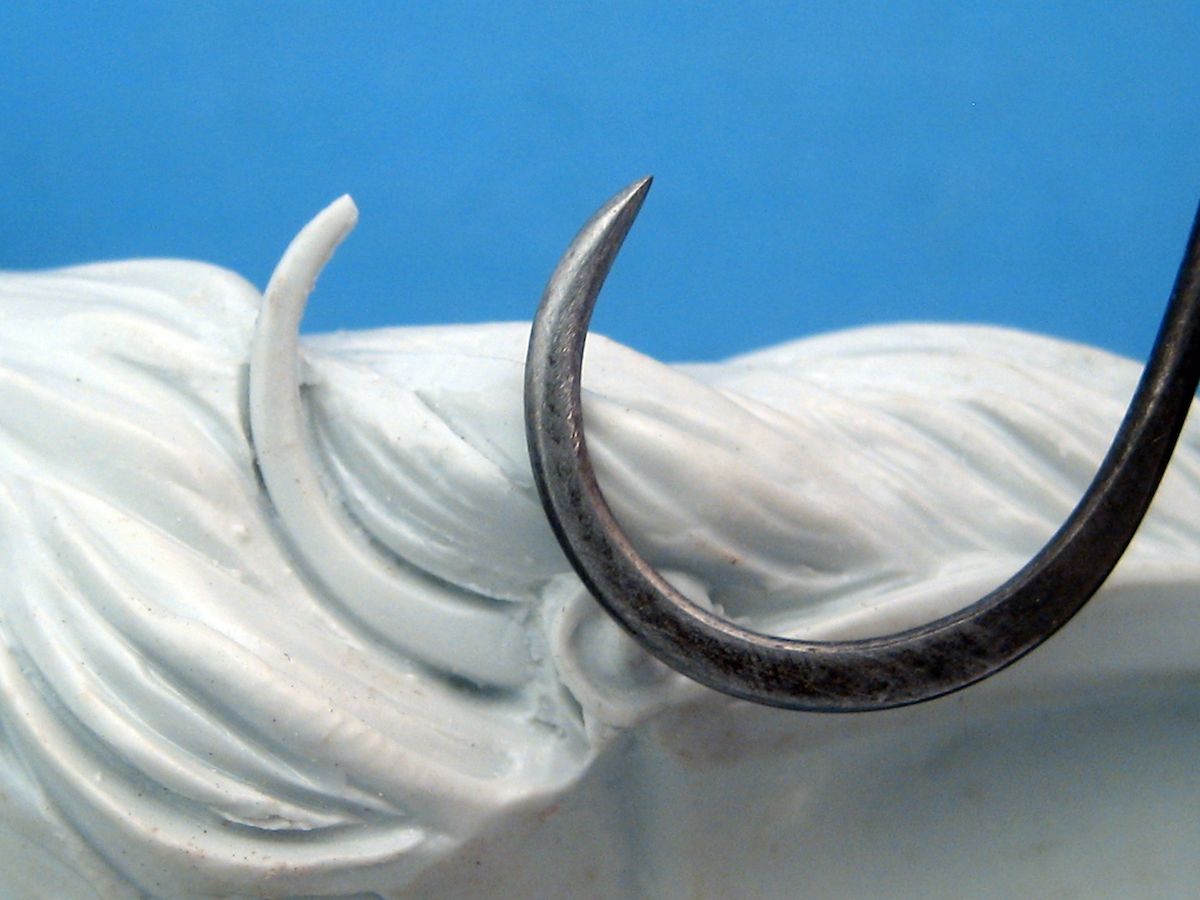 It was then cut to the proper length. The original resin was dremeled away and the replacements were glued in place.  They fit and matched perfectly, they were solid, and they were dangerous! I snagged my finger a couple of times but they never broke! The face, torso and legs were assembled before painting. Her arms and hair were left separate for ease of painting. These parts were prepared so as to fit perfectly when glued later. A small amount of Aves Apoxie Sculpt was applied to one piece and baby powder was dusted onto the receiving part. The two pieces were pushed firmly together then gently separated. Any excess Aves that squeezed out was trimmed away. The receiving part was dusted again and the two pieces were again fit together. This was done several times until a precise tight fit was achieved. 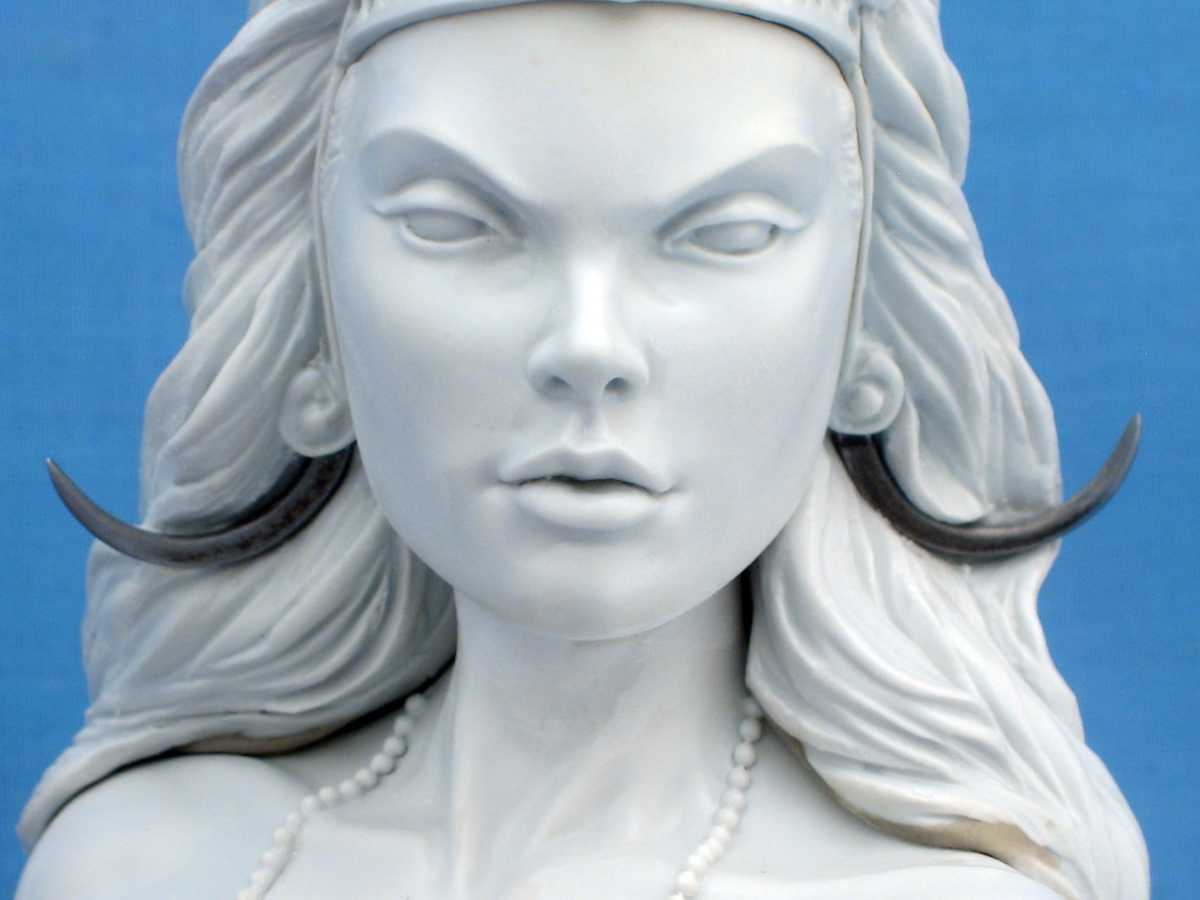 The last alteration made to the kit was to the base. The original kit came with a plain wood oval, which was just too simple for displaying a princess.  The kit now comes with a brand new properly fitted base.  A slightly smaller base was substituted to eliminate some of the empty space. Several small castings of rock formations were added. Aves Apoxie Sculpt was used to transition around the rocks and add an undulating surface to the plaque. The Aves was textured with a small piece of stiff air filter, some balled aluminum foil, and coarse sandpaper. A heavy application of modeling paste was made with a sponge to create a unifying surface. 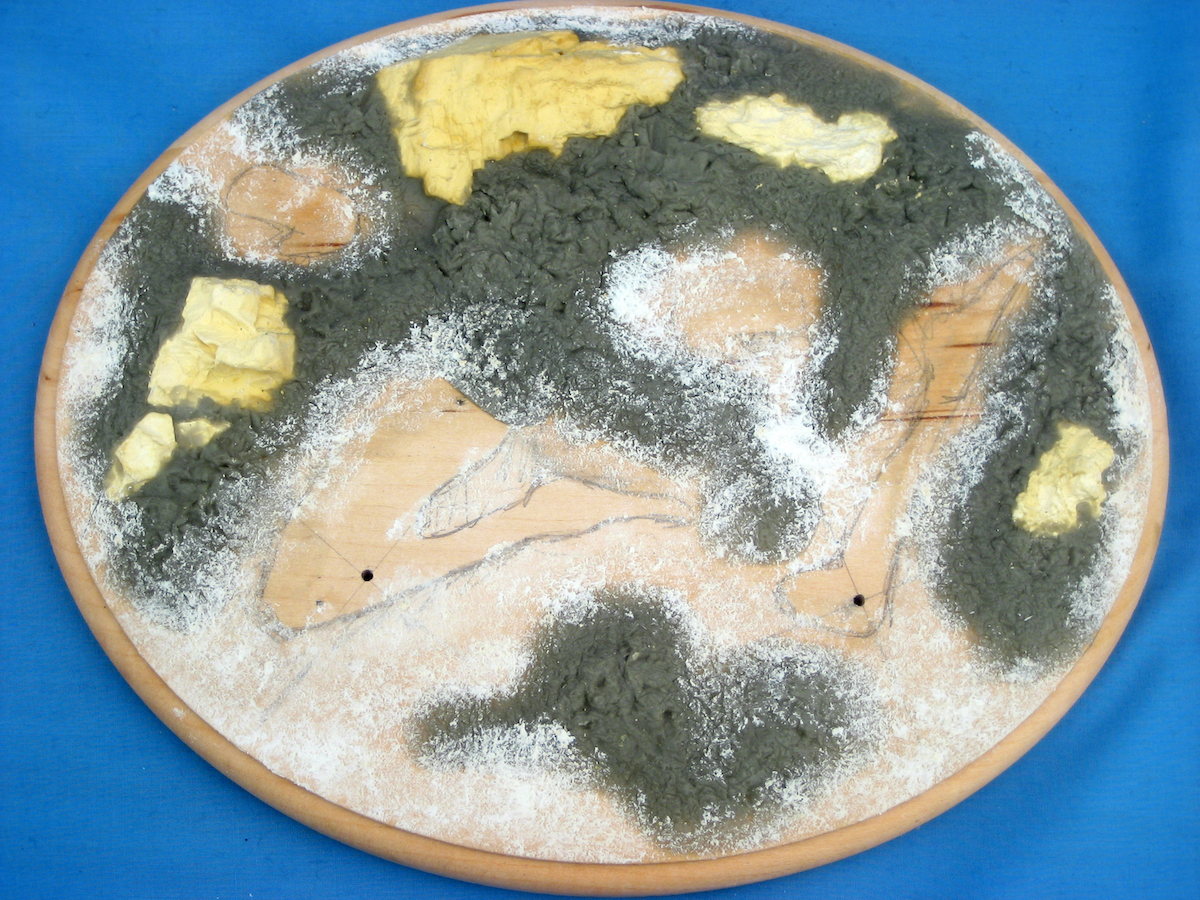 All of the colors used on this piece, unless specifically indicated, were Garage Kits.US Colors paint and were airbrushed using a Badger Sotar 20/20. Masking was done with Silly Putty. Dull Cote was used to seal and protect between layers of color and before and after every watercolor wash. Krylon Ruddy Brown primer is nearly identical to Burnt Sienna. The figure was primed with the Krylon, lightly sanded, and then airbrushed with Burnt Sienna to base. 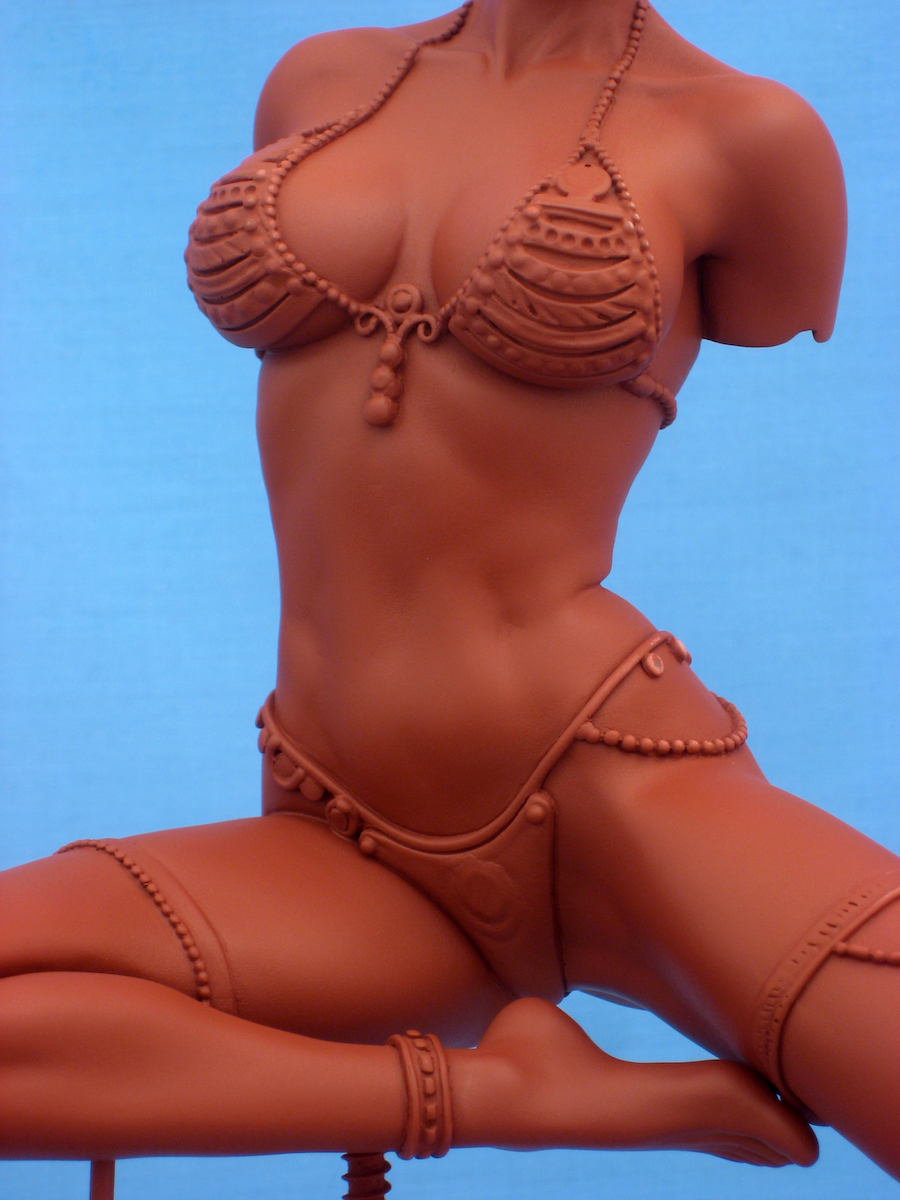 Leather Tan was then sprayed as an overall fill color allowing the base to show in recessed and shadow areas. 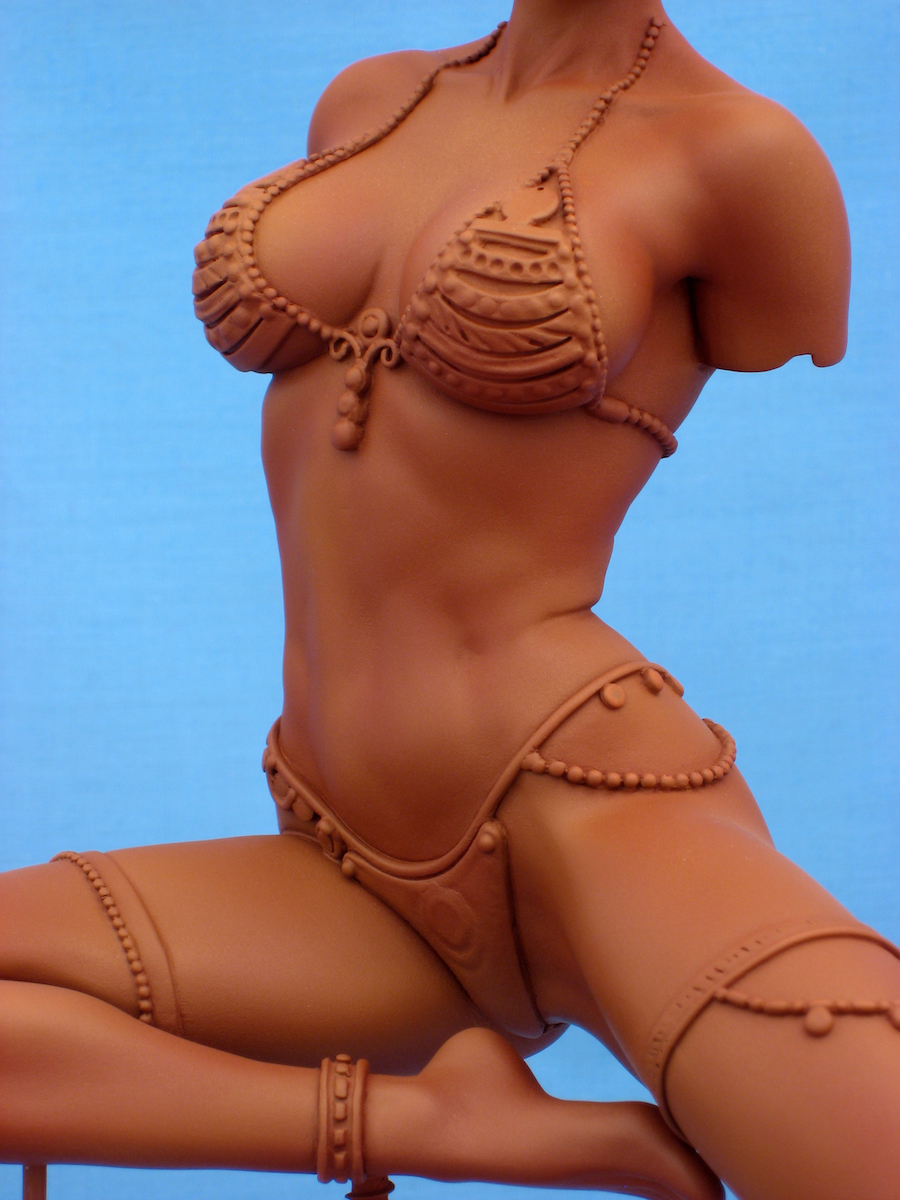 Next an equal mix of Bronze Flesh and Leather Tan with just a touch of Burnt Sienna was used to begin the build up of lighter areas. Bronze Flesh was applied to provide the highlights. With the basic values and range of shading established the overall color needed fine-tuned. A light misting of Chestnut was sprayed, followed by a misting of Sepia and then Transparent Natural Flesh. The highlights were punched up with a little 2/1 mix of Bronze Flesh and Leather Tan. Still not satisfied with the color, Golden Toner was misted over all. These misted layers are thin and transparent allowing the colors beneath to show through while slightly enhancing the overall color. Transparent Burnt Sienna was used on the underside of muscle masses to deepen the shadows. Red/pink pastel was applied to the chest, between the breasts, and on the backside, the fingers and knees. A light application of Bronze Flesh was used for the last highlight. Altogether there were twelve layers of color used to achieve the final look of the skin. Turning attention to the face, the edging along the upper lip was lined with Bronze Flesh. I find it easier to hold the brush, a longer liner, perpendicular to the edge of the lip and pull along the length to add the highlight line. The upper lip was done with Burnt Sienna and a little True Red. The lower lip was brushed Leather Tan with a touch of True Red. The same brush technique was used to add a dark line on the lower lip. The eyes were brushed Sandstone with a little Transparent Ocean Blue added. Off White was then used to highlight the sclera. A light pink edging around the eye was done with watercolor. It was allowed to dry and a darker pink was dotted into the corners. The eyebrows were brushed in with black watercolor. 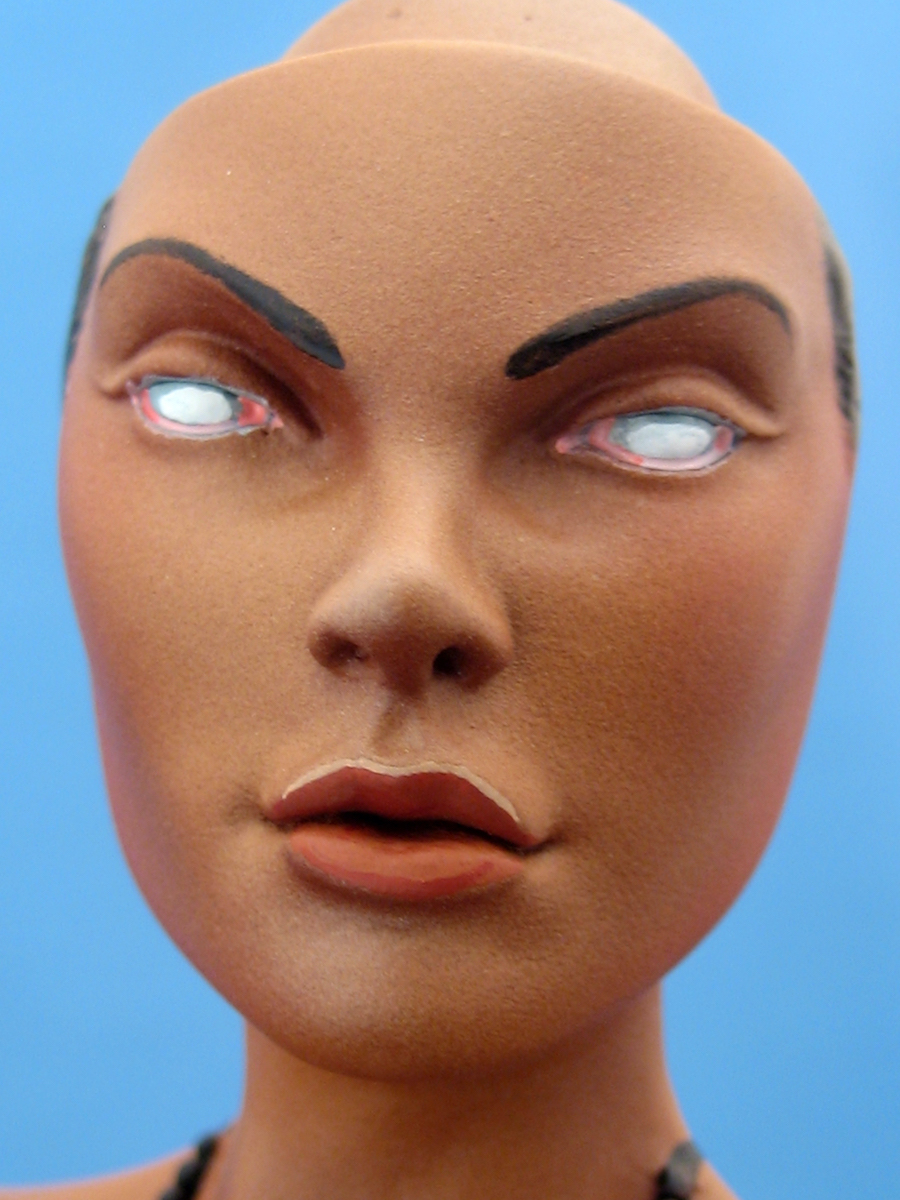 It was also used between the lips to accentuate a separation, for the eyelashes, and to establish the iris. Purple with a touch of Pure White was used as a base color. Striations were added with different values of the same two colors. The eyelid edging was done in Bronze Flesh. An equal mix of the same color with Leather Tan was used as an upper eyelid highlight. Bronze Flesh was applied over the fingernails. Brown watercolor was used on the sides of the nails and cuticles. A thin line of KB Flesh was drawn across the tip of the nail and a line of Leather Tan beside that along the underside. 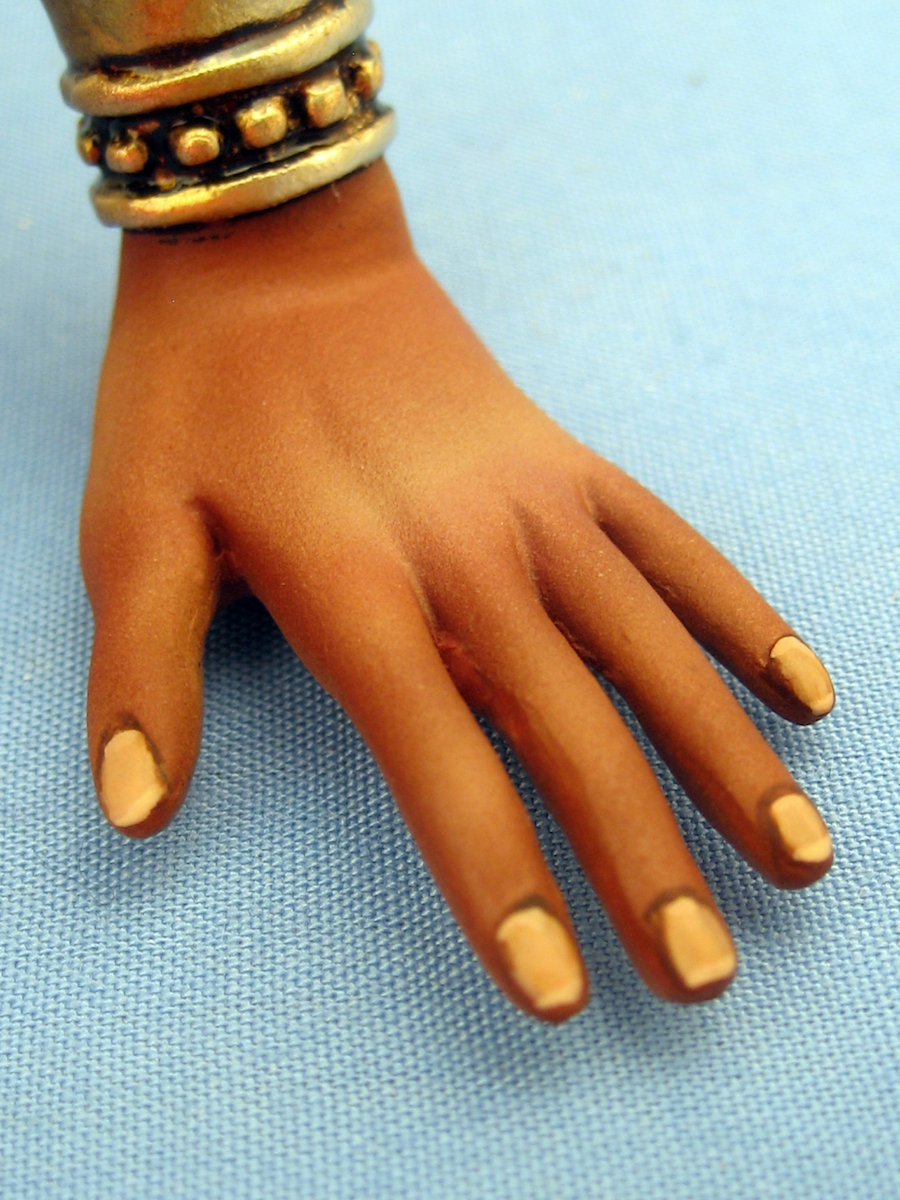 I love that the hair was a separate piece. It was so much easier not having to mask before painting. It was based in Jet Black then highlighted with a mix of 10 parts Payne's Gray, 2 parts Ocean Blue, and 1 part Pure White. The flow and detail of the hair were accented by using a mix of Brilliant Blue and Black Liquitex Soft Body Acrylic (LSBA) to dry brush. The tiara was brushed with gold enamel. The details were darkened with a dark brown watercolor stain. The stain was also used on both the arm and wrist bracelets. Purple and Silver Metallic were mixed to paint the side stones. The center one was based in Silver Metallic then brushed over with Tamiya Transparent Red. 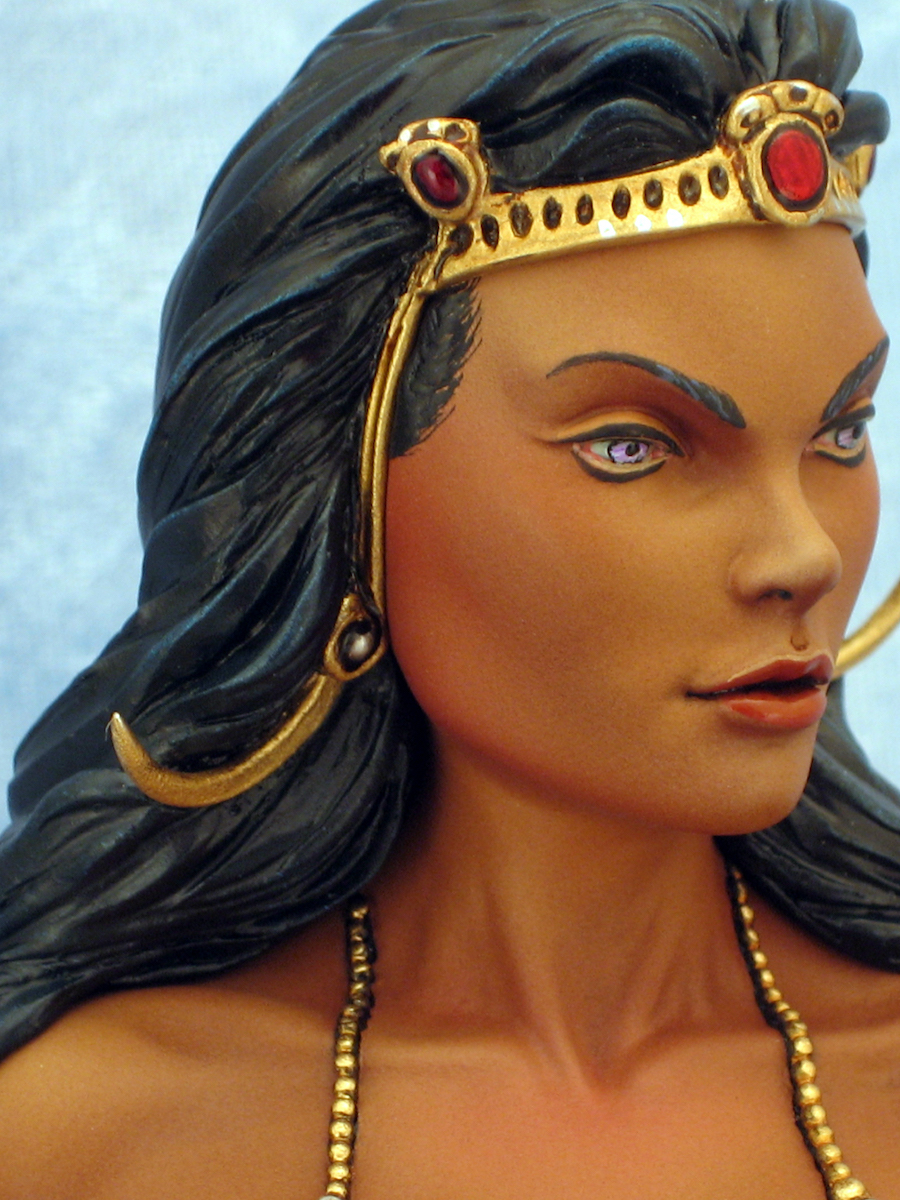 All of the metal work was edged in black watercolor then filled with Jet Black. Deep Gold Pearl was then brushed over the black. The color was airbrushed on the larger parts. Next, Gold Pearl was applied followed by a slight Silver Metallic highlight. A final light misting of Gold Pearl unified the colors. The entire figure and top of the base were misted with Freestyle Flat Kote for a dead flat finish. Tamiya Clear was then brushed over the eyes, lips, finger/toe nails, and all of the gold pieces. Gold enamel was applied on some of the jewelry for variation and several spots of Chrome were dotted as highlights. Small plastic "Fire and Ice" Elements by Swarovski Crystal, purchased at A.C. Moore, were added in several spots to complete the figure. 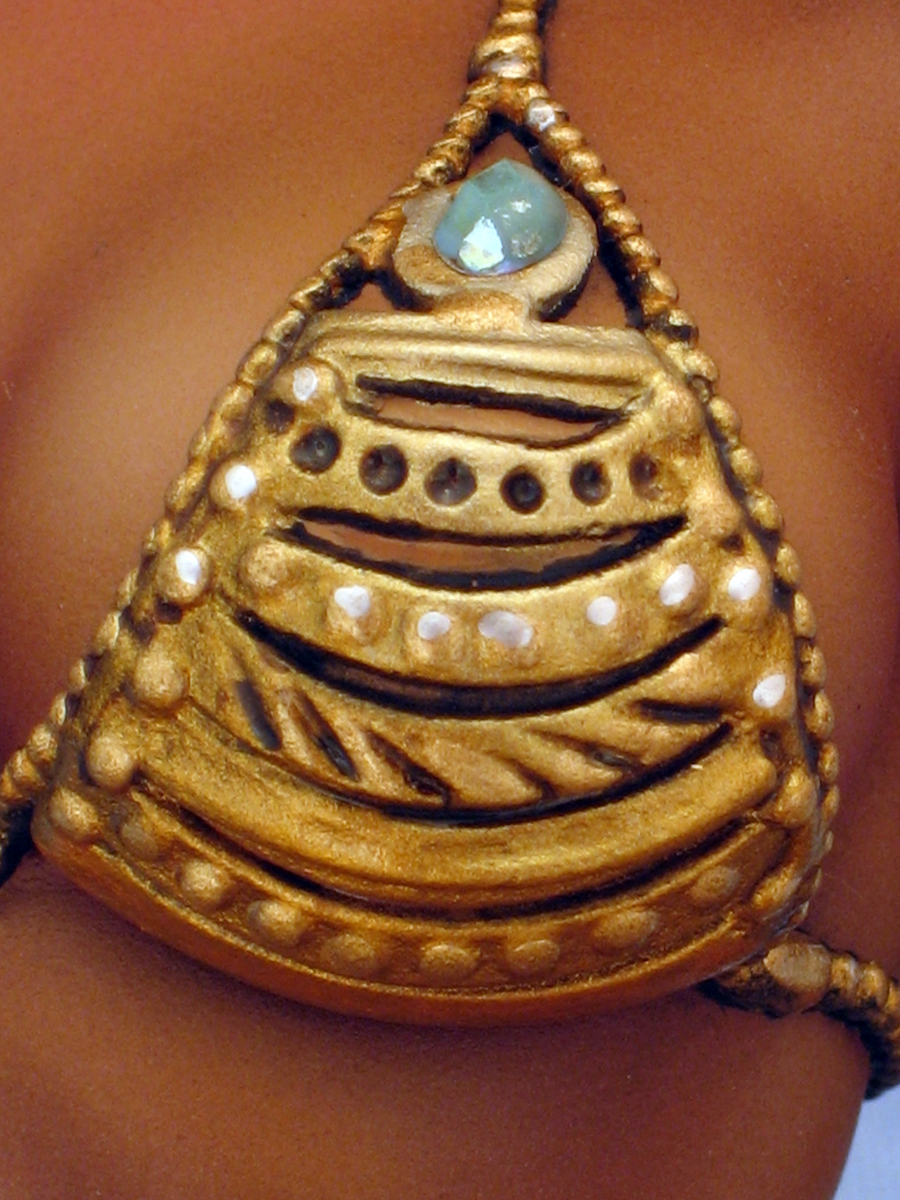 The base went through several transitions before arriving at its final appearance. It was given a deep purple watercolor wash as the initial layer over Gray Surface Prep. Some red orange LSBA was dry brushed over that followed by rust, medium orange and yellow ochre. A sponge was used to apply the highlight pale yellow. 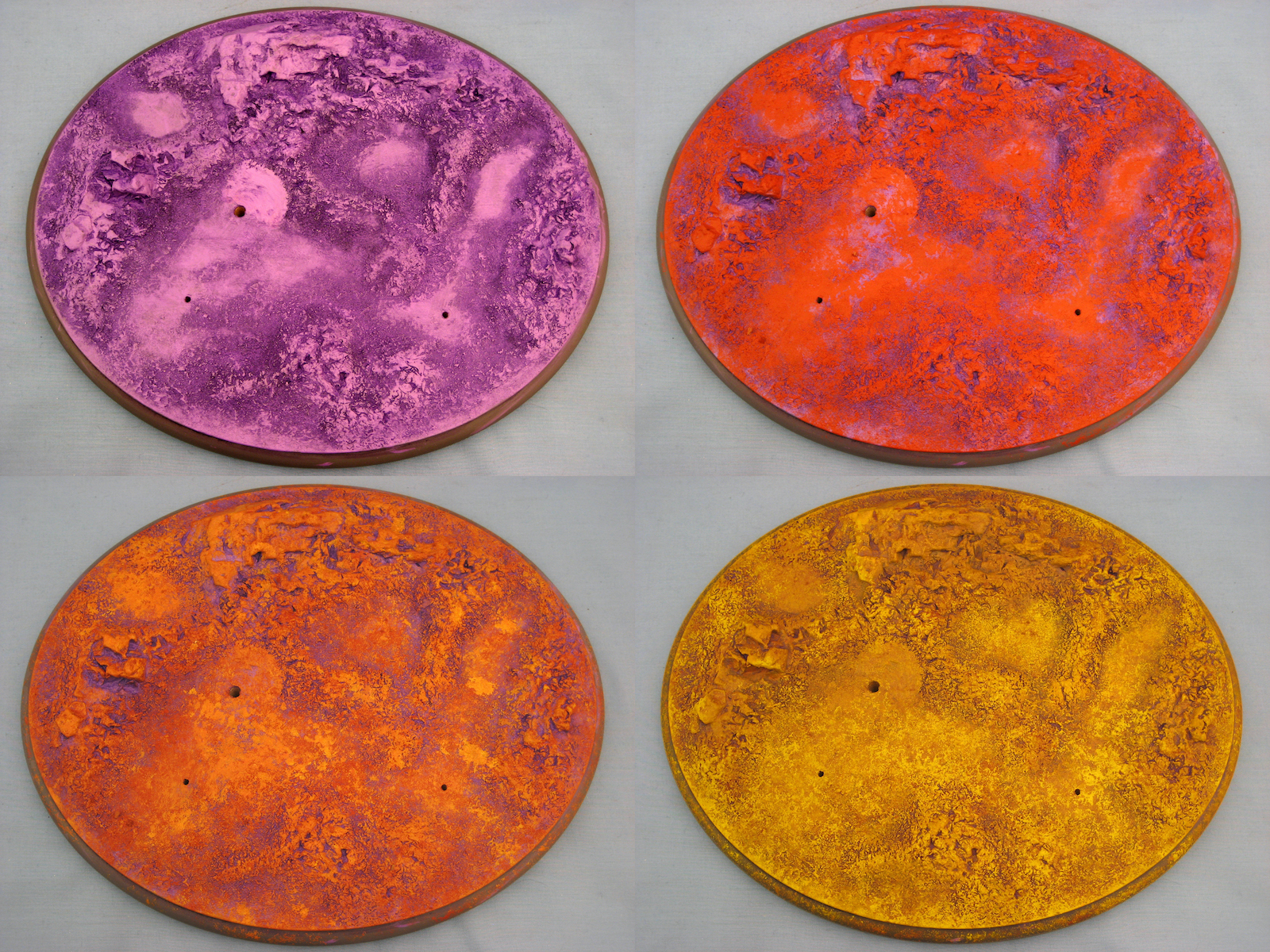 In between, a red brown watercolor stain was used to cut down on the strong purple base. Finally several shades of ochre and yellow were spattered using a toothbrush to simulate a sand-like surface. 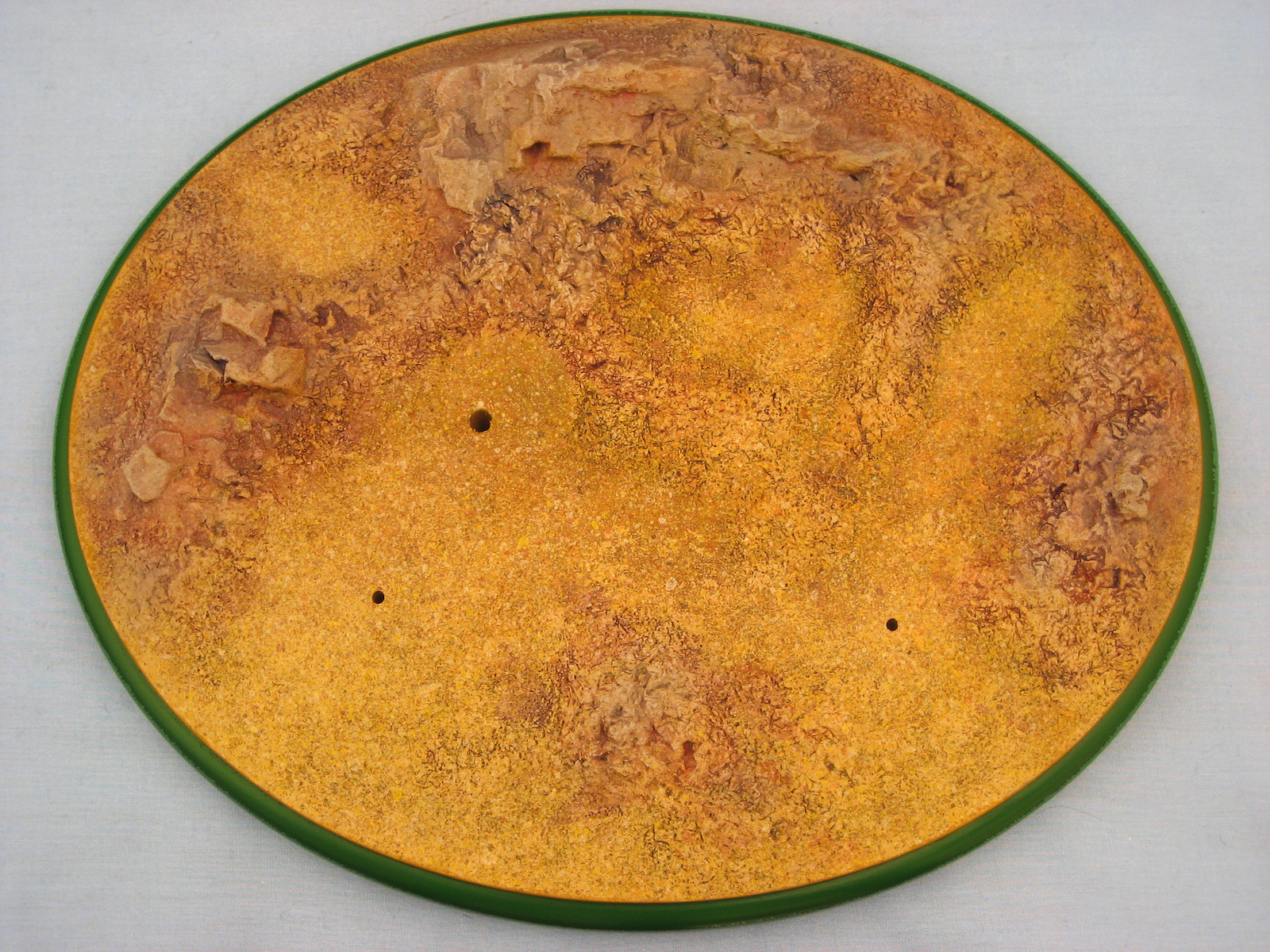 To be honest, there may be another color or two in the mix. I became so involved with the evolving palette that I neglected to record the colors. The edge was sprayed a dark green mixed from Ocean Blue and a little Bright Yellow. More yellow was added to the mix for a highlight. Several layers of clear acrylic were sprayed over the trim to give it a high gloss finish.

Below are photographs of the actual retooled kit now available.