1981 was a great year for Werewolf fans but for me it went beyond great! The amazing Rob Bottin working on "The Howling" film, and the incredibly talented SPFX artist Rick Baker stealing the show with the now classic and in my opinion one out of the two best Werewolf films made to date "An American Werewolf in London".

Actor David Naughton played the lead as David Kessler and the monstrous Wolf.

Well fast forward to last year, I knew I wanted to own a life sized Kessler Wolf head, specifically a wall hanger to go with my Howling wall hanger.

I contacted a sculptor and friend that I knew would make my dream come true and bring this to life, the talented Giovanni Zorloza ... the completed sculpt went beyond my expectations.

Once I received the prototype cast, the color scheme went to work.

After washing the cast with soap and water I prepped the big boy by giving it a light sanding here and there then priming him in black primer.

The first step I took was airbrushing Garage Kit Colors (GKC) Pure White over the flesh area of the face and the mouth. (Pic 1) 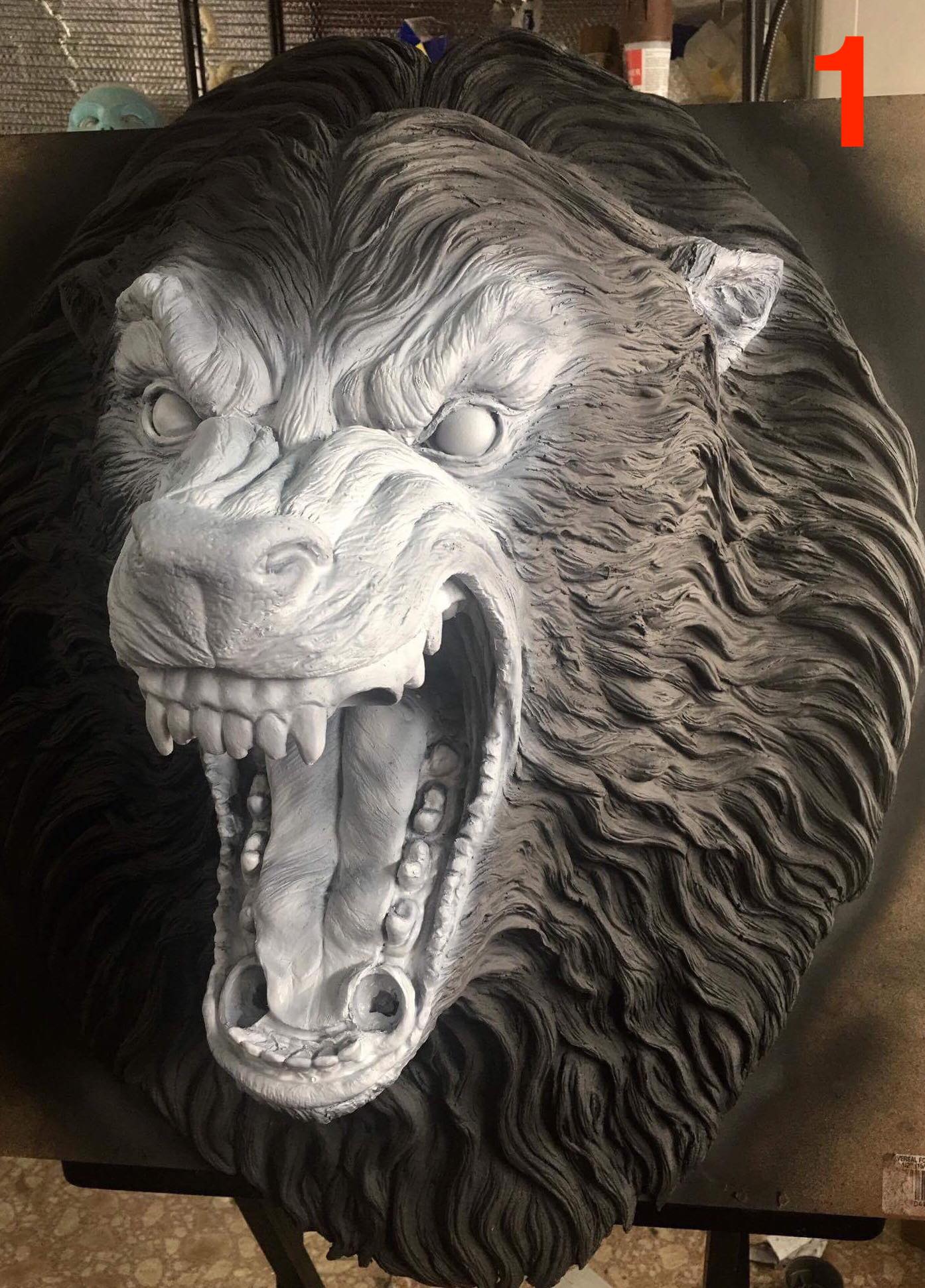 For the second step I lightly airbrushed GKC Light African American Flesh over the fleshy areas like the brows, eye area and muzzle. (Pic 2) 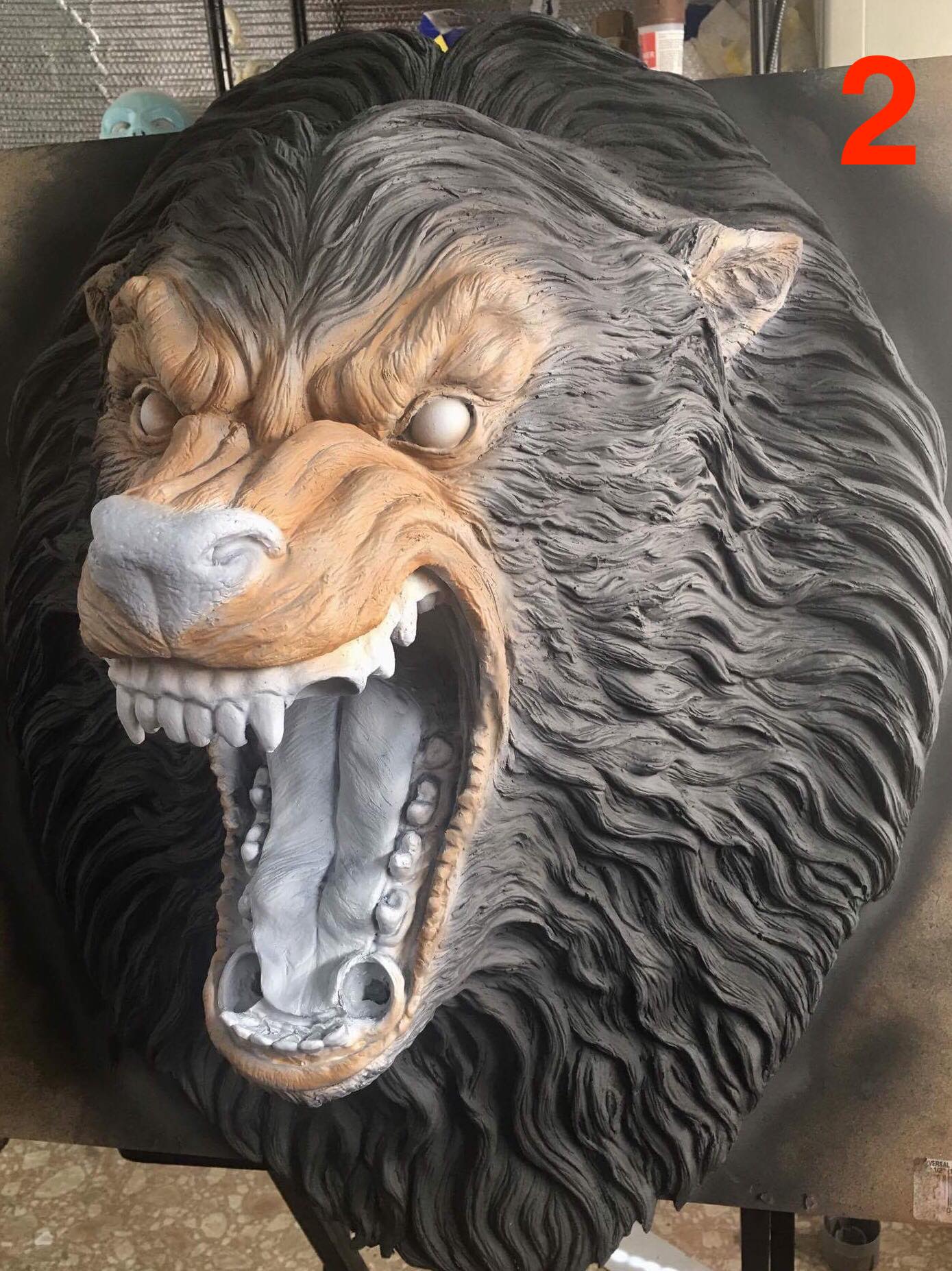 NOTE: For each step I made sure to leave the eyes and mouth with the initial white color.

Next I used GKC Transparent Payne's Grey and once again lightly airbrushed around the flesh area within the wrinkles, folds and crevices to darken those areas where shadows would normally hit. (Pic 3) 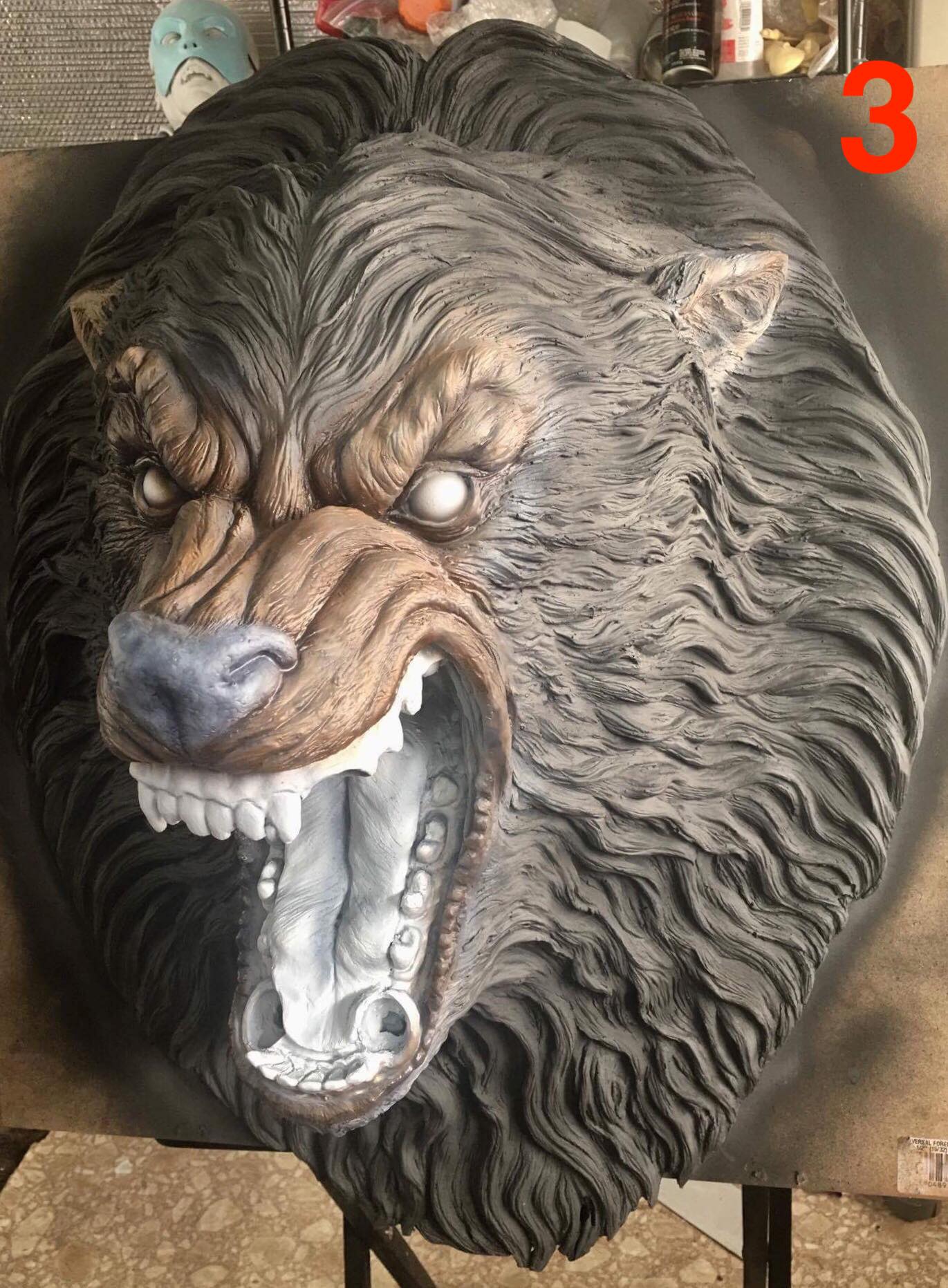 To blend and bring it all together I used GKC Transparent Rich Brown to noodle large patterns around the same areas that I used the GKC Light African American Flesh color and went over some of the wrinkles in the face.  I went back in with the GKC Payne's grey and darkened around the crevices in the brows, around the eyelids and edges of the lower jaw.  I also painted the nose with (GKC) Pun13 Black. (Pic 4) 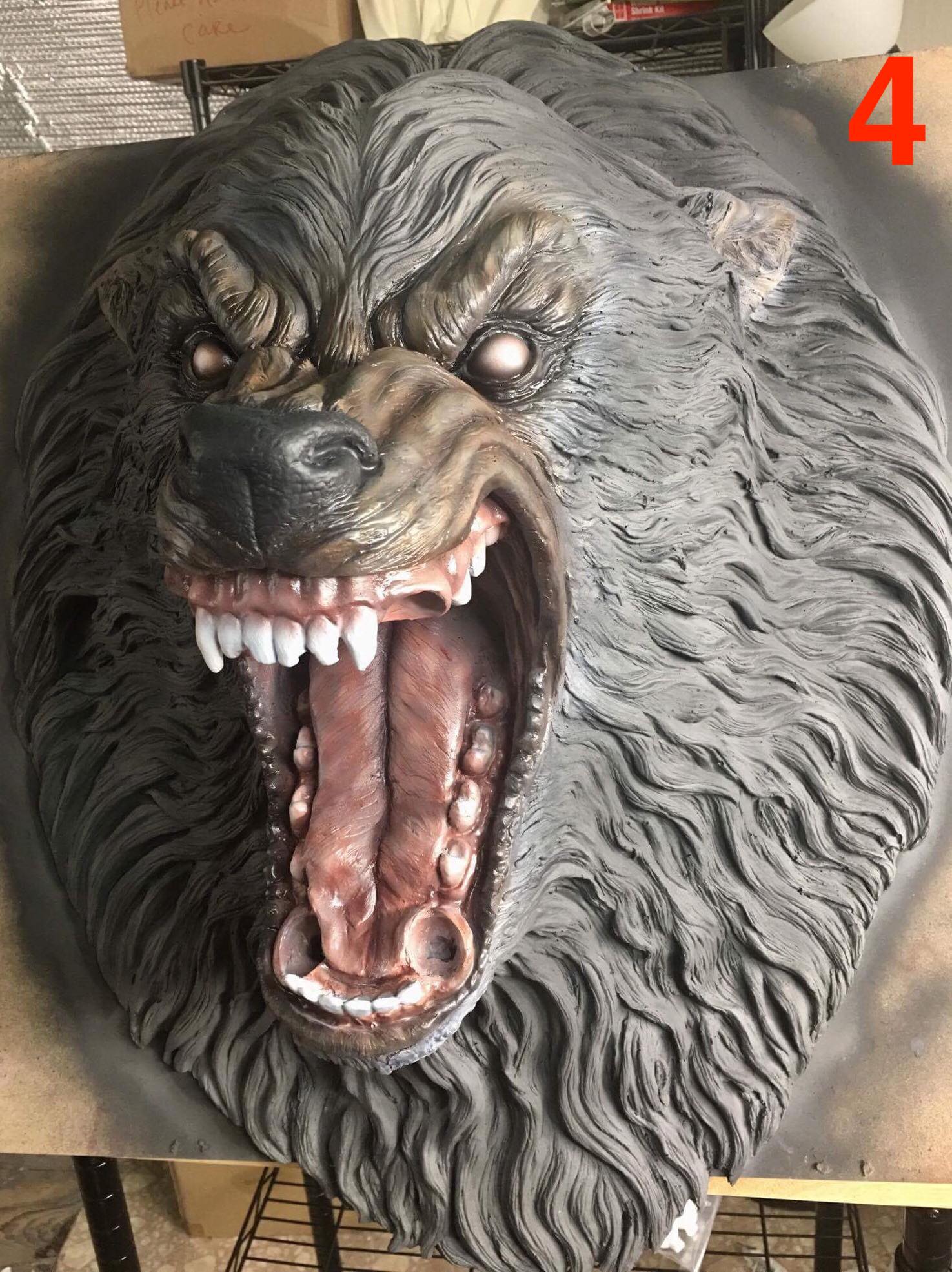 For the gums, tongue and inside of the mouth i lightly airbrushed GKC transparent mars red, make sure when doing this first step it's done very lightly as you'll be working in layers with other transparent colors. With the same GKC transparent mars red i airbrush around the outer edges of the sclera which is the whites of the eyes, then I airbrushed in between the indentations along the gums, darkening them with the transparent mars red going a little stronger with the airbrush. The same was done to the tongue along the centerline, folds and crevices. At this point I used GKC nuance blue and airbrushed the blue in a small and subtle noodling pattern to break up the browns and give off an organic translucency look. The nuance blue and GKC gold toner was also used around the inside of the mouth and tongue sparingly for the same effect.

For the teeth I airbrushed once again lightly to shade with GKC gold toner giving the teeth an aged look. GKC transparent rich brown was then airbrushed around the area where the teeth and gums connect for a darker aged appearance. (Pic 5) Now I move on to the eyes.

As (Pic 6) shows the eyes were painted white from the previous first steps. 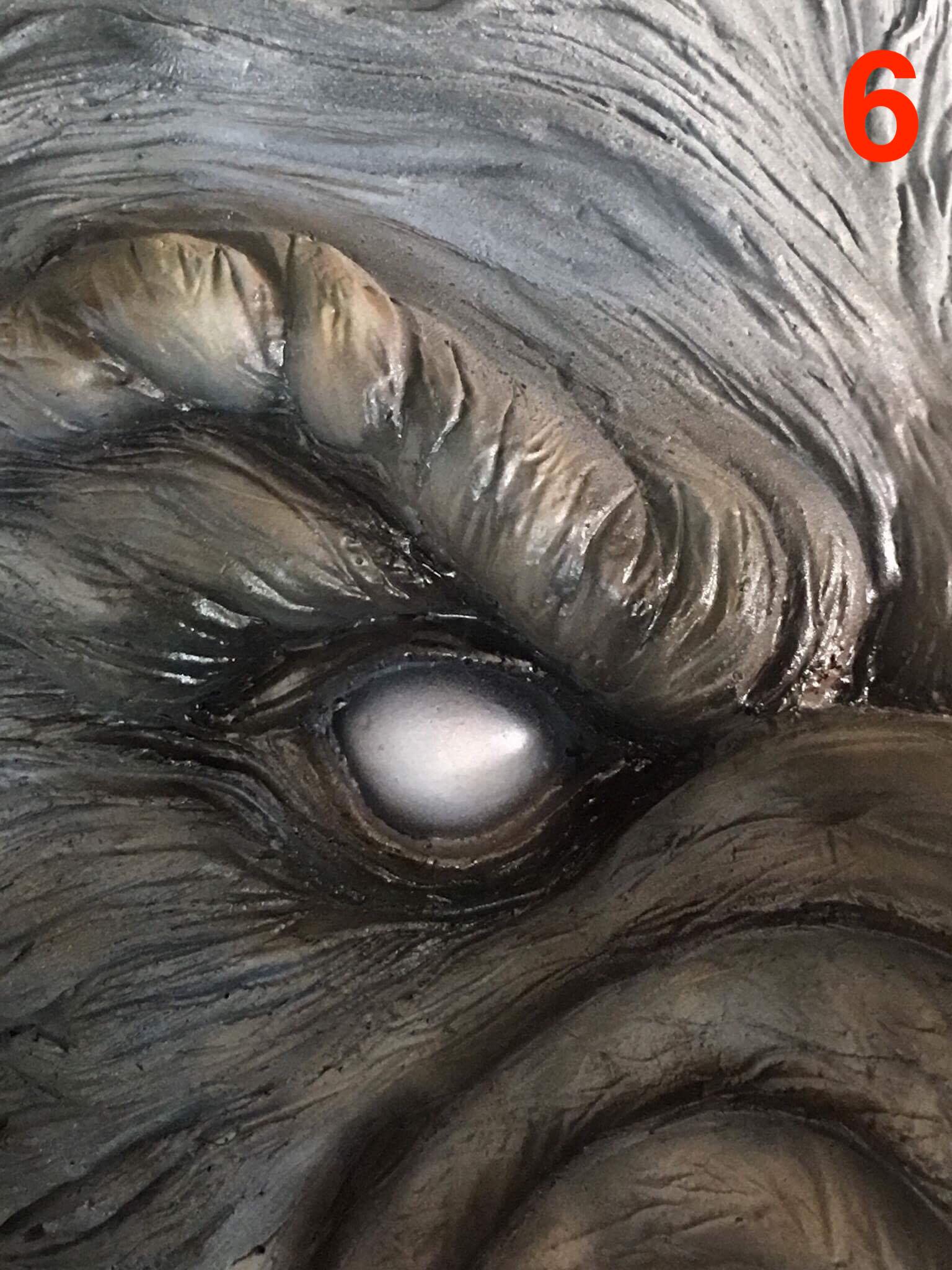 After using reference from the film, the Kessler wolf had bright yellowish eyes that stood out. Using the white as a base coat really helped in using GKC bright yellow which really popped. (Pic 7) 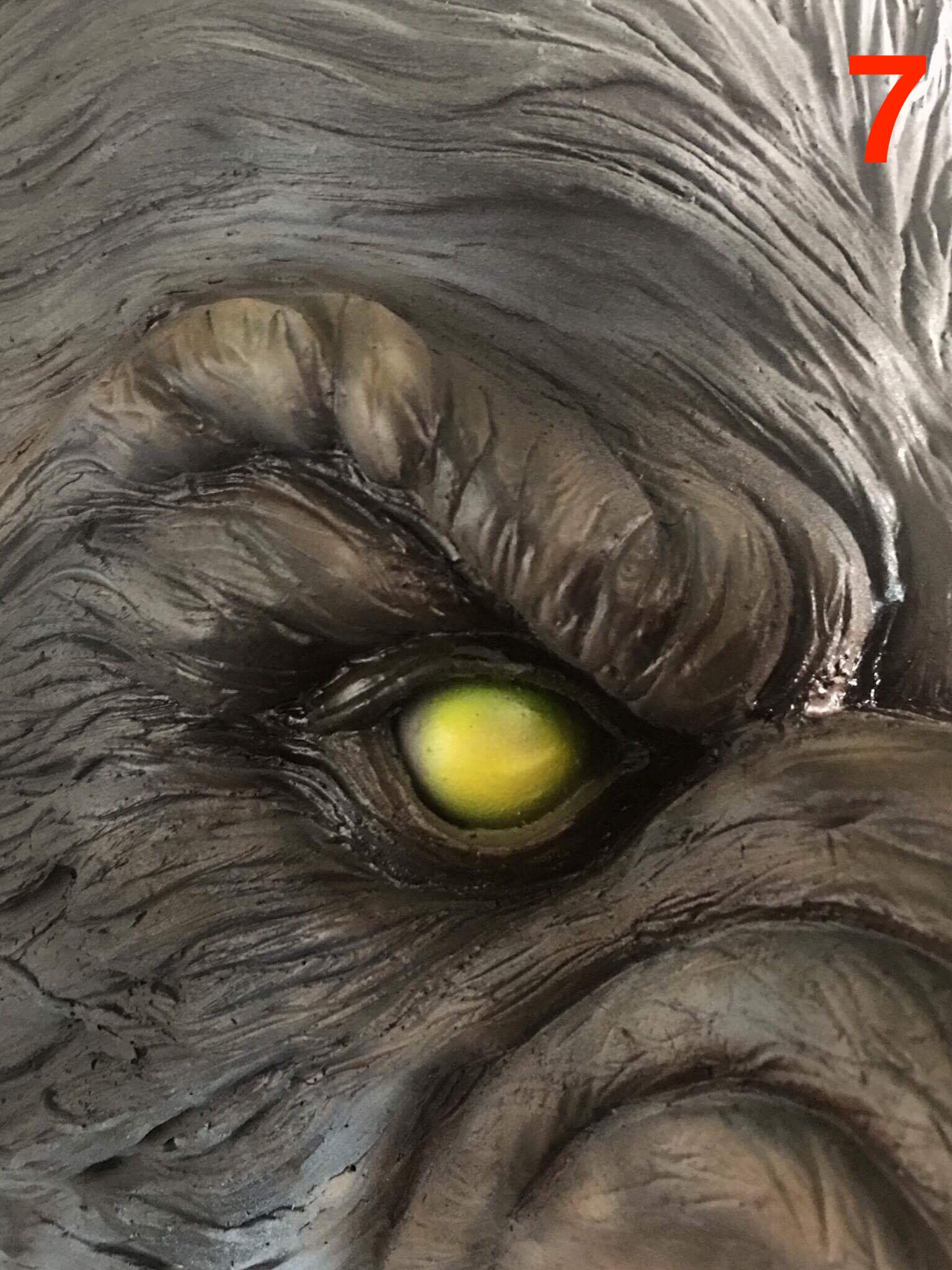 Next GKC Transparent Mars Red was airbrushed around the surrounding inner part of the eye giving off a halo effect. This toned down the yellow a little and blended the colors naturally. (Pic 8) 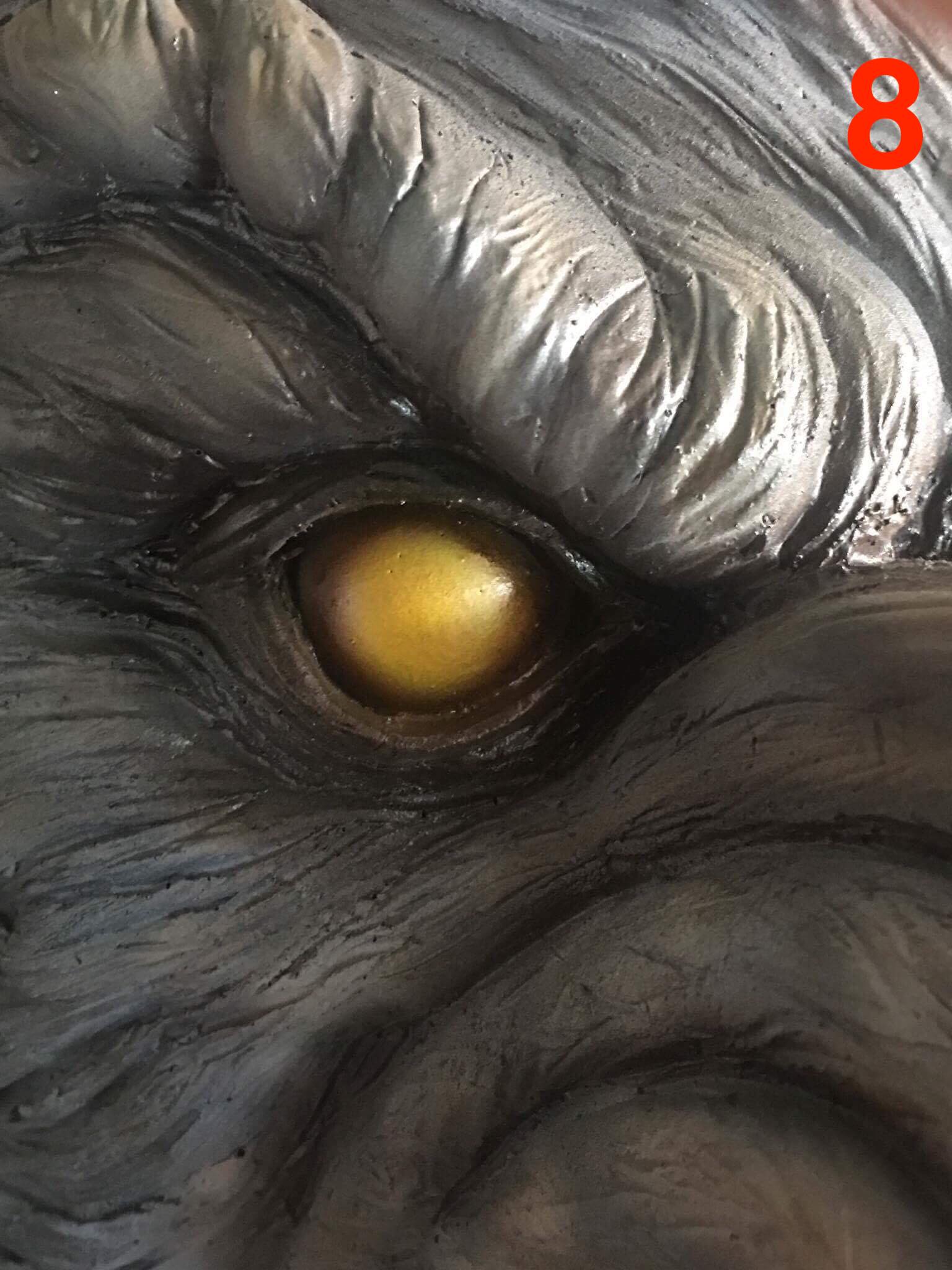 For the pupil I used a permanent black sharpie marker and placed a dot in the center of the eye as a reference marker. Coming back to the trusty GKC Pun13 Black, I carefully airbrushed the pupil over the Sharpie mark. At this point I wanted to soften up the edges of the pupil so I used black chalk pastel and dabbed the tip of a small rounded brush and patted the pupil until I got the edges soft. I sealed the eyes with Testor's Dull Coat lightly from a distance making sure I didn't wash away the pastel work. (Pic 9) 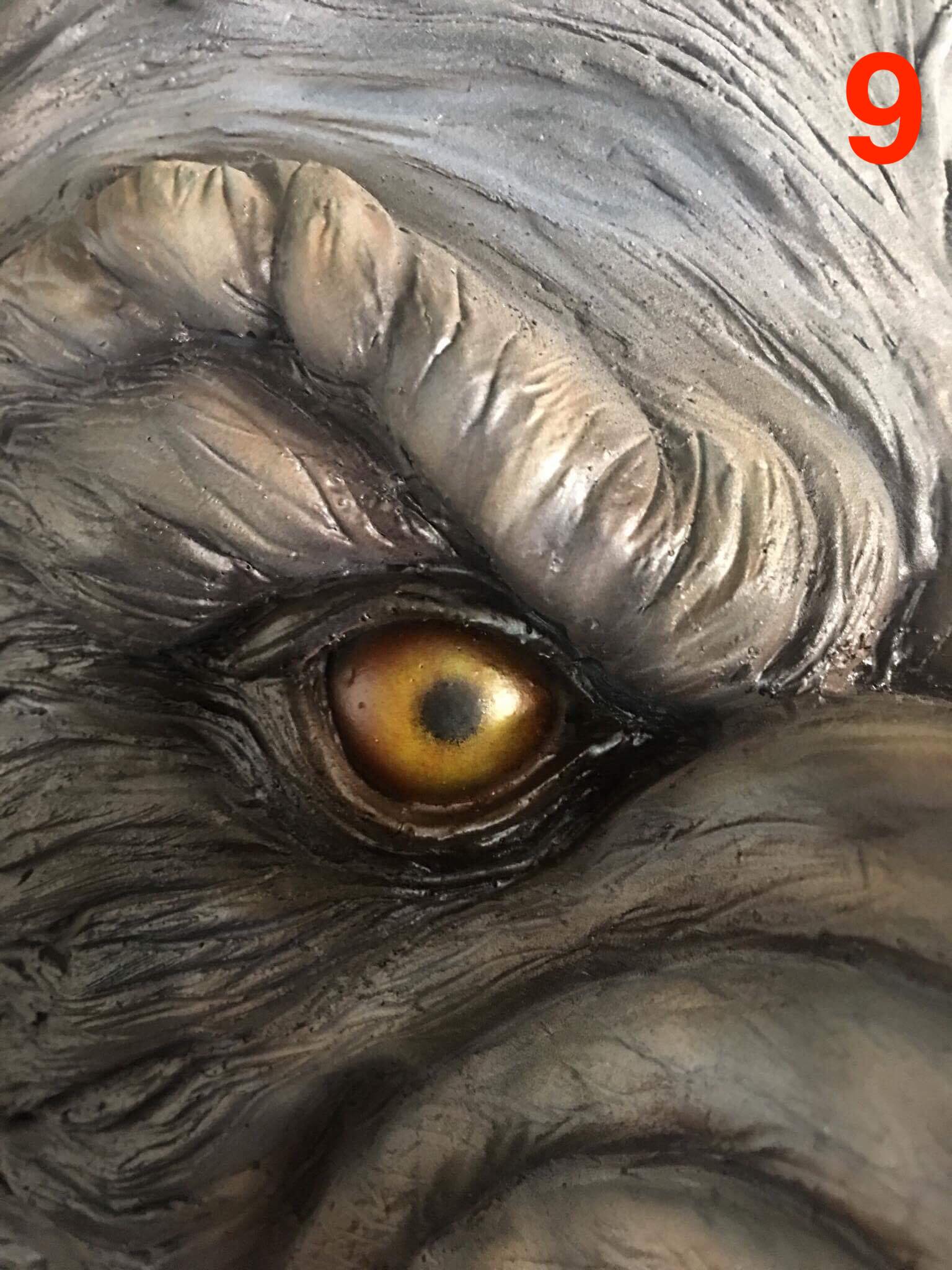 To finish off the eyes i went back to GKC transparent mars red but this time using a small detail brush I painted a couple of striations brushing from the inside of the eye towards the center. (Pic 10) 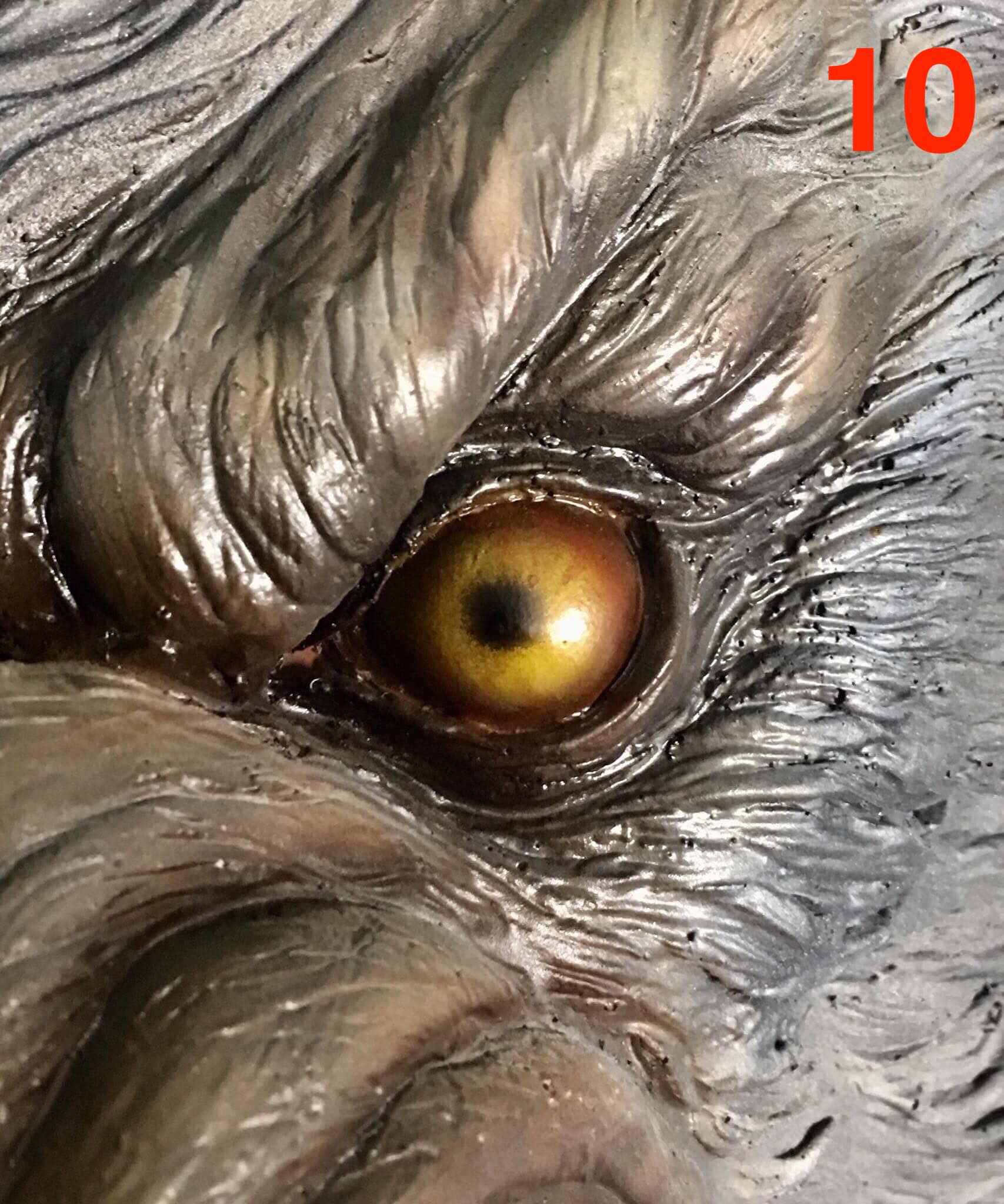 For the drool, I used a small gage translucent fishing wire and cut small sections at the length desired. Using a small drop of CA glue, I attached one end to the top gum and the other to the bottom gum. I then attached a small fish line to the one attached to emulate saliva separating as he opened his mouth. (Pic 11) 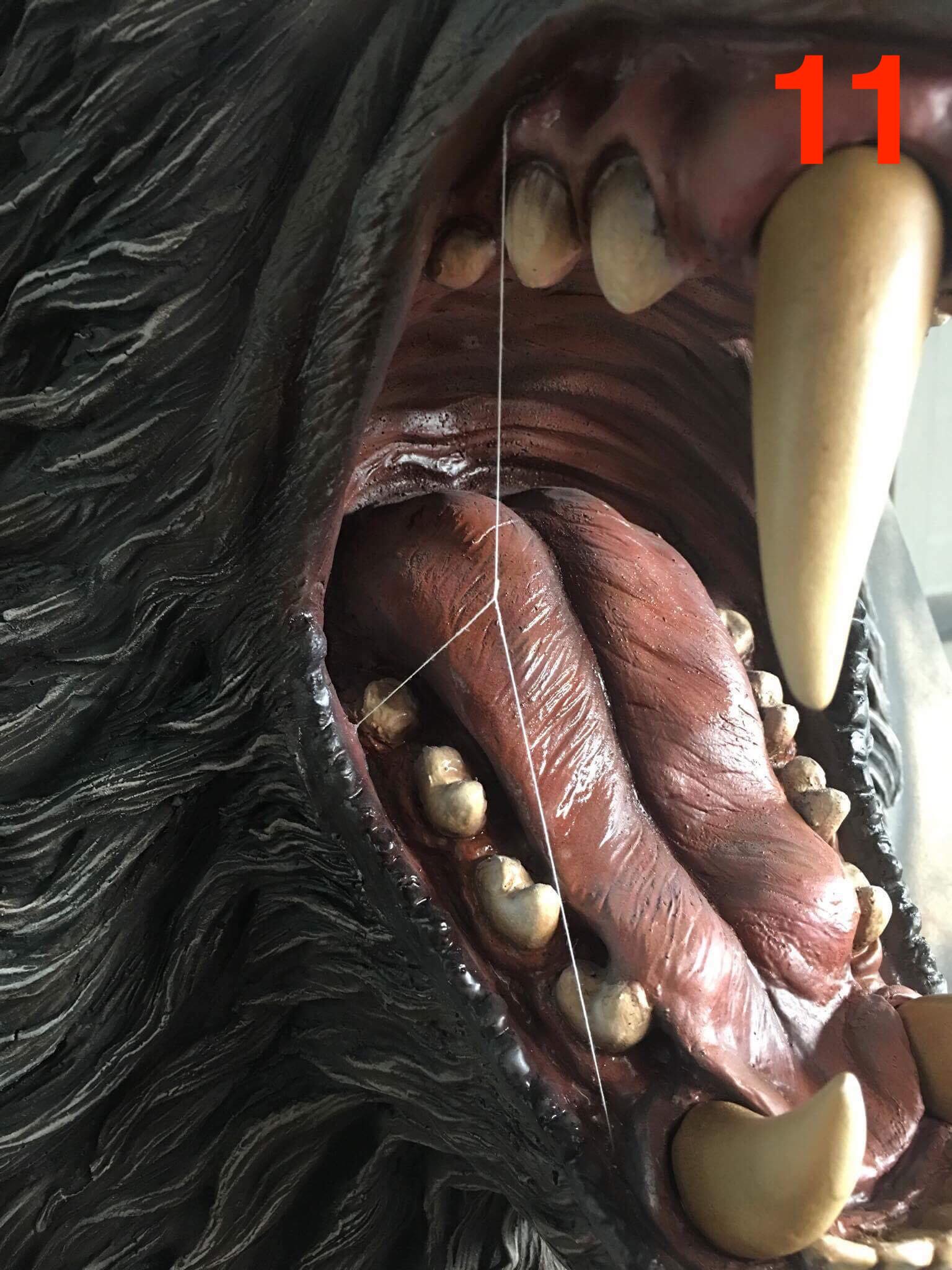 Now for the fun part, adding the drool. I use two-part 5-minute clear epoxy. I do this in small sections at a time. After mixing both parts well I use a small throw away brush purchased at Michaels and working it slowly I brush the epoxy on the fishing line letting it drip while I brush the drips back and forth until it starts curing. I repeat this until I get the thickness and look I need. (Pic 12) 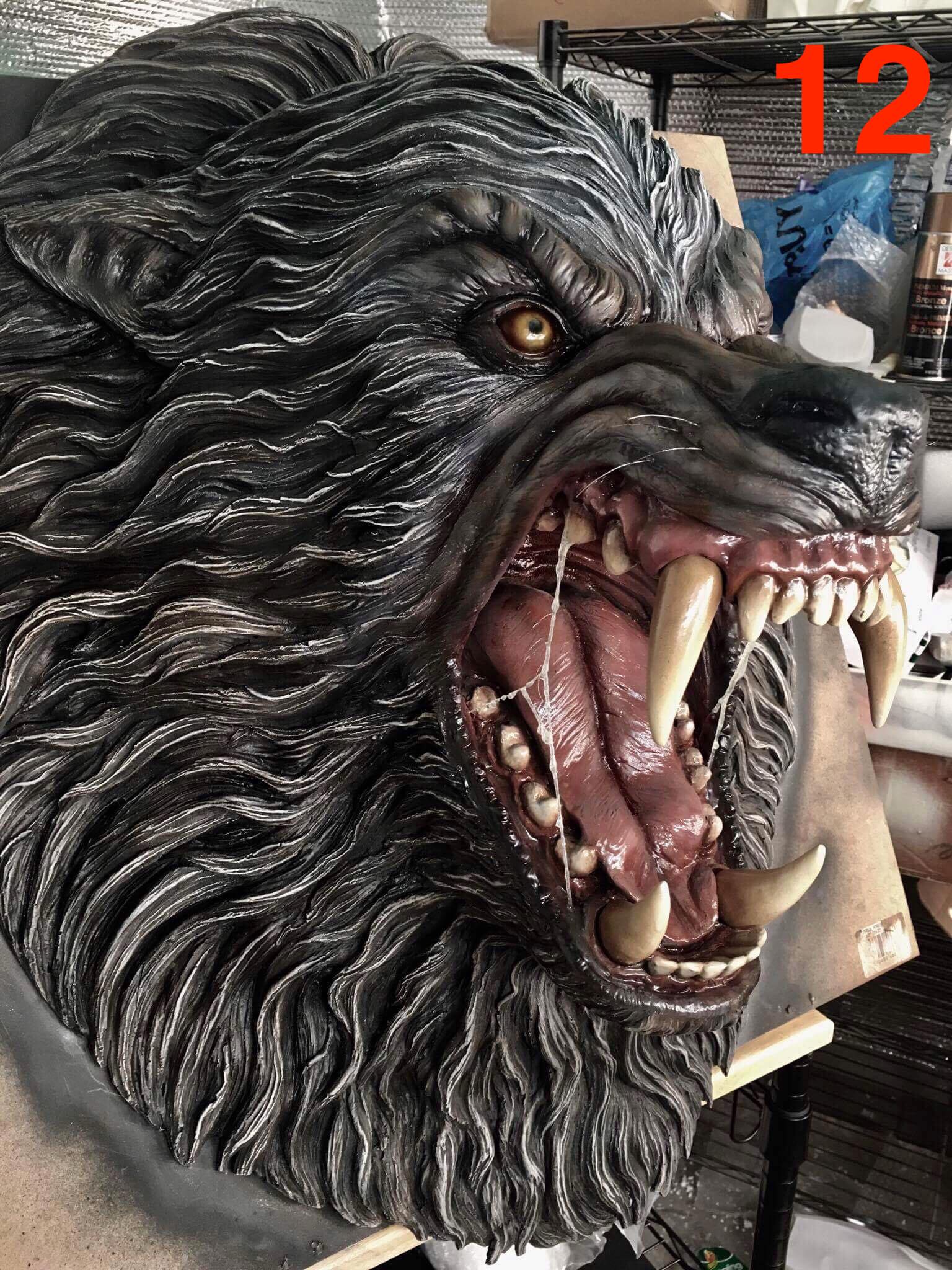 After sealing once again all my work to protect the paint up and letting it dry, I gloss the eyes and mouth with Tamiya clear X_22.

Well, there you have it. A full grown hairy, vicious Lycan that only a Mother wolf would love!

If anyone have any question please don't hesitate to contact me on Facebook via my name (Saul Alvarez) and to see some of my other works search for my FB page Alvarez Arts.

To purchase the Kessler Werewolf contact Giovanni Zorloza at Zorloza@aol.com